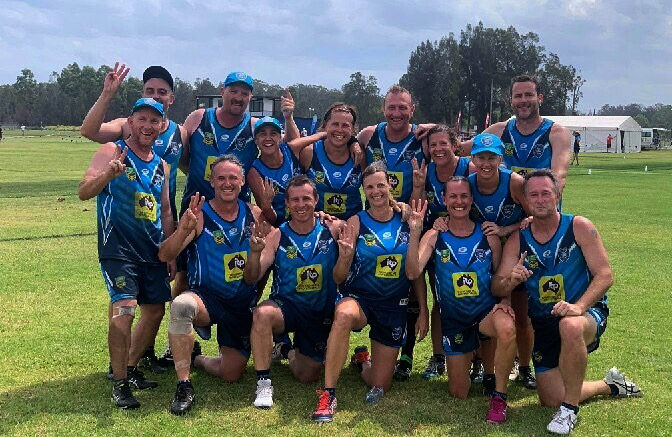 A Peninsula touch team has been heralded as a “three-peat” side after winning its third consecutive State Cup final on December 6.

Peninsula Touch Association’s Mixed Masters side claimed the title at the 2020 State Cup Tournament in a hard-fought final win against the Port Macquarie Makos.

Due to a COVID-19 affected game structure, teams only had a five-minute break in between the games to rest.

Team captain, Peter Healey, said he was proud of his team’s accomplishment and determination to win back-to-back titles.

“Naturally expectations were pretty high going into this year’s State Cup and while it was great to win three titles in a row, it was even more special winning with a great bunch of friends,” Healey said.

“Most of this team has been playing mixed touch together since they played in the mixed open division in the 1990s.

“It’s not just a win for this team though, it is a win for the Peninsula Club which has consistently punched above its weight at State Cup over recent years.”

Game one of the tournament saw the Peninsula side off to a positive start with a 6-1 victory over Penrith, before taking on Gunnedah in a tight 4-2 encounter.

The Piranhas then took on Port Macquarie in a group match to run out convincing 4-1 winners, before comfortably winning 6-0 and 10-0 respectively over Berkeley Vale and St George.

Having scored 30 tries and only conceded five during the round games, Peninsula went into the finals series as hot favourites in their semi-final encounter against Penrith with a. 6-0 victory.

The final fixture saw Peninsula meet Port Macquarie in a 2019 grand final rematch with the Makos taking an early 1-0 lead.

The reigning champions soon bounced back from the setback, piling on six tries with a treble to Rod Dillon, who was consequently named as player of the final, along with Karina Haddin.

The association was also represented by three other teams at the tournament with the Men’s and Women’s 20s side, the Mixed Open team, and the Mens 50s.