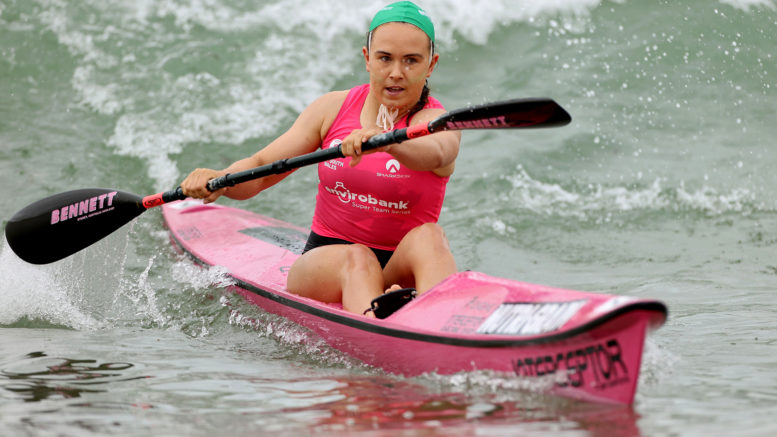 Umina SLSC patrolling member Smith said she was fortunate to have been selected as one of the six captains.

“The selectors picked 106 athletes, and then we made our selections like an NBA draft,” Smith said.

“So, we drafted via zoom and recruited our team members through that process which was really exciting and innovative for the sport.”

Smith’s team placed fourth in the series, but Smith individually took out the Female Single Ski winning the maximum number of points for her team.

Smith started with a big lead, but eventually, the race had come down to the wire when 11 competitors all rode the same wave and crossed the line together.

“It was so nail-biting, I think that’s the luck of the surf which made the finish all the more exciting,” Smith said.

“I think it was definitely great for spectators to see that wave come through with all of us riding it, there was certainly a lot of hype around the finish.”

The first round was hosted at Swansea Belmont SLSC, followed by a cancelled round two at Bulli Beach, and finished with the final round at Umina.

Smith has now joined Newport SLSC to pursue her competitive career but said she had originally been at Umina SLSC since she was five years old.

“It’s always special to race at the beach you have grown up at,” Smith said.

“I was really fortunate enough to have all these friendly faces there setting up the carnival, and it just felt like I was going down to the beach for a training session.

“But to have everyone there and be able to put on such a great event was really special to be a part of.”

She said she was surrounded by a few other local competitors including Nicole Majsak from Ocean Beach SLSC, and fellow teammate Lachlan Braddish from Umina Beach SLSC.

“It was a good season starter, as a lot of our earlier events had been cancelled due to COVID-19 and not being able to travel interstate,” Smith said.

“This event was created to draw everyone together and get us back to racing and build towards the State Australian Championships in March and April.

“So, for us, it was great to get some solid racing in before Christmas.”

NSW Director of Surf Sports, Donny Van Keimpema, said the new series was a result of cancelled events throughout the year.

“We got the state team members together and worked out the concept, and what kind of races were going to happen,” Keimpema said.

“Thanks to our sponsors Envirobank and Shark Skin; it’s great that we have the support from them to bring this concept together.

“Next year we will be doing the exact same thing; we don’t know what time of the year, but we are looking forward to holding another three rounds and possibly putting on a youth one as well.”