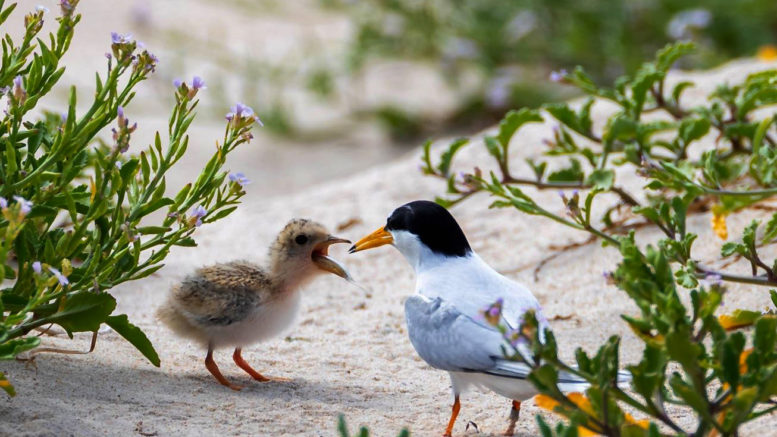 Despite being on track for a record breaking breeding season, The North Entrance Little Tern colony is again under threat from human interference.

According to Council, the colony’s Karagi Point nesting grounds have been besieged by beachgoers as a walkway, dumping ground, and even a bathroom, causing untold damage to the site as well as stress to the colony, and now Council is calling on community members to change their ways or risk copping some hefty fines.

“So many in our community celebrate the arrival of these special birds every year, and while Council have played our part to protect them with fencing and signage, it is also up to the community to do their part,” said Council Unit Manager, Environmental Management, Luke Sulkowski.

“Unfortunately, people have been ignoring the fencing and signage and continue to use the nesting site as a short cut to and from Karagi Point.

“The damage to the nests has been devastating to the population and is distressing to see.

“In just one short monitoring period this week, our staff observed more than 10 instances of people that were fishing nearby accessing the fenced and signposted area for use as a public bathroom.

“I am disgusted by this behaviour, as I expect most of our community would also be, and it must stop,” Sulkowski said.

“The amount of rubbish left in the area is astounding, on average we are collecting 120 litres, that’s almost your full red bin, every day from the site, and more on Mondays after weekends.

“This amount of rubbish would not only be extremely detrimental to our waterways if it was washed in, but the food waste attracts predators who then attack the Little Tern eggs and chicks.

“The community was shocked last year when the birds were harassed by individuals throwing eggs and harassing chicks.

“While the actions of those at The Entrance North at the moment may not appear as detrimental, the impact is significant and if it continues, we will see more chicks lost as a direct result.

Residents and visitors are encouraged to report sightings of these threatened birds, harmful activities or damage to nests, by calling Environment Line on 1300 361 967.

It is an offence under the Biodiversity Conservation Act 2016 to harm any animal that is a threatened species in NSW.