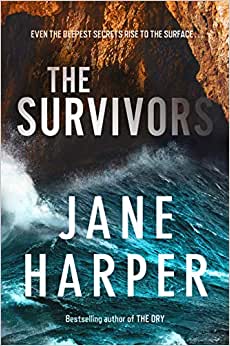 We’ve all made mistakes and have regrets.

Wish we could undo something from our past.

But imagine making a mistake that lead to the death of a loved one – having to deal with the guilt.

Kieran Elliot made such a mistake when he was younger.

It was during a fatal storm that resulted in the death of two young men at sea – his older brother, Finn, and a young father whose still-furious son (Liam) now works at The Surf and Turf.

On the same night a young woman, Gabby Birch, went missing, and the mystery of her disappearance has never been solved.

Saddled with grief, Kieren left his home in Evelyn Bay, Tasmania and moved to Sydney.

Years later, while at a bar, Kieren ran into Mia.

Mia also grew up in Evelyn Bay and remembered Kieran.

Younger Kieran wouldn’t have given Mia the time of day, but older Kieran is different.

Fast forward and Kieran and Mia now have a baby, Audrey.

They are visiting Evelyn Bay to help Kieran’s mum, Verity, pack up the house.

Kieran’s dad, Brian is suffering dementia and will be moving to a nursing home.

Verity will rent a one-bedroom place nearby.

The air is heavy in the Elliot household.

As Kieran, Mia and Audrey move about town they run into old friends and acquaintances. But not everyone is happy to see Kieran.

Liam, at the Surf and Turf would be happy to never see Kieran’s face again.

Locals used to rely on fishing and forestry, now they rely on dophin-watching and dives to the wreckage of the SS Mary Minerva.

A shipwreck that happened over a century ago where fifty-four people died.

There is even a memorial called Survivors, “the three life-size iron figures” which “were permanently visible from the cliffs and the sea, tall enough that even in the highest tides and the worse weather, they never fully disappeared underwater.”

The plot thickens one day after Kieran’s return when another young woman, Bronte, who also works at The Surf and Turf, is found dead on the beach at the end of her shift.

As police investigate, the focus is always on Kieran who comes to realise he has been so consumed by his own guilt, that he has overlooked the pieces of a much bigger puzzle.

Some say the pace of the book was slow, while others have said it was thrilling – I found it to be neither of those, but I still quite enjoyed getting to know the characters and the events that caused so much grief to a small town.

You could really feel how weighed down Kieran was dealing with his guilt.

What was a disappointment was the ending.

I found it convoluted and had difficulty following the course of events.

Maybe it is my lack of knowledge about caves!

I also found Audrey was more of an accessory and wondered who would leave their baby on the beach while they went swimming.

Nevertheless, the positives definitely outweighed the negatives and I would recommend this book.

Book Review – Not a Happy Family

Book Review – A Hunter-Gatherer’s Guide to the 21st Century