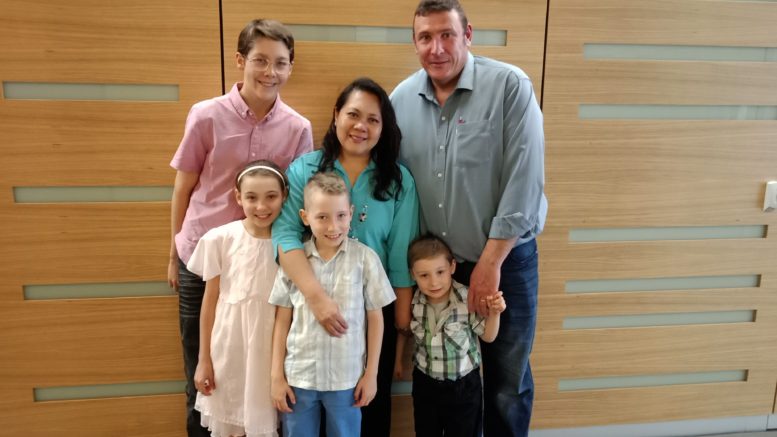 With National Adoption Awareness Month having drawn to a close at the end of November, Parliamentary Secretary for the Central Coast, Adam Crouch, said NSW was leading the way when it comes to finding forever homes for children and young people in out-of-home care.

“Every child on the Central Coast should have a safe, loving and permanent home,” Crouch said.

“I am so pleased the NSW Government was able to assist in 17 adoptions from out-of-home care to Central Coast families in 2019/20.

“There is always more to do, and our Government’s priority is to find ‘forever families’ for children who cannot remain with their birth parents for safety reasons.”

The Latimer family of Copacabana can attest to the benefits of adoption.

Bernie and Matthew Latimer have four adopted children and couldn’t be happier.

“We started off as foster carers through Bernardos in January, 2014,” Bernie Latimer said.

“We fostered three siblings for a couple of years until early 2016, when they went back to live with their birth mother.

“But they came back in December of that year, along with a fourth sibling.

“We decided to put the adoption process into action and in October 2019 we adopted all four.

“It has been fabulous for all of us – we now have a sense of stability and the kids are all thriving.”

Ranging in age from 16-6, the children are all high performers, she said.

“We have four children at varying stages of development from Kindy to high school and it’s so rewarding to see how far they’ve come,” Latimer said.

“I would definitely encourage others to adopt.

“It has changed our lives, and of course the children’s lives.

“They now feel they have a permanent home and are part of a community instead of going from one foster home to another.

“They have improved academically, socially, and emotionally.”

Barnardos Australia CEO, Deirdre Cheers said keeping siblings together and preserving vital relationships was paramount, especially for children in foster care who have already been through a great deal of upheaval in their young lives.

“Barnardos is always looking for people like the Latimers who are willing to open their hearts and homes to foster and adopt older children and groups of siblings, while supporting transparency and openness through birth family contact,” she said.

In NSW, people can now be assessed, trained and authorised to become both a foster carer and adoptive parent at the same time, so applicants don’t have to undergo the authorisation process multiple times.

“Not only is it important to provide permanency for children, but it is vital to do it in a way where they feel connected to their heritage and understand where they came from,” he said.

The NSW Government is strengthening support for foster and kinship carers and prospective adoptive parents through the $7M My Forever Family program, which offers training and support to parents.