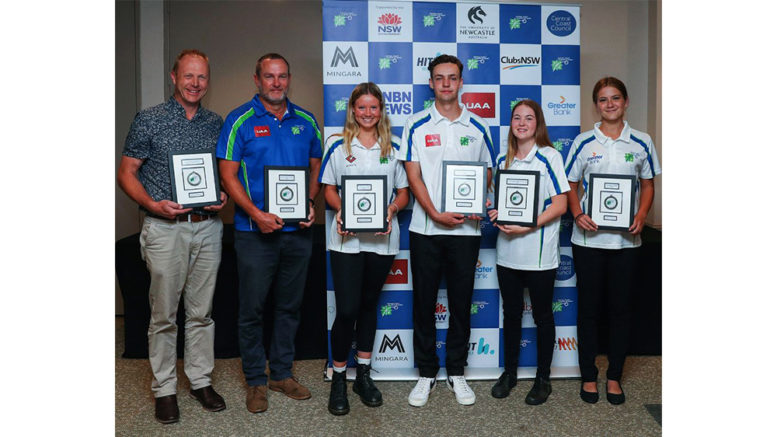 Some of the Coast’s best and brightest athletes, coaches and officials have been recognised for their dedication, perseverance and achievements in the face of COVID-19, following the 2020 VIATEK Central Coast Academy of Sport Awards.

Held at Mingara Recreation Club on December 2, the Awards are the Academy’s (CCAS) way of honouring exceptional local talent and those that go above and beyond to foster said talent through their individual sporting codes.

Jones and Norris received their accolades following a highly successful year within their respective Academy Programs.

“Always looking to develop new skills and fine tune existing skills, Jones demonstrated that he is capable of pushing himself in order to improve his game as well as working on his fitness outside of the program, which showed when testing the fitness of athletes.

“AJ is respectful to both players and coaches, always willing to learn and improve, and has a high training intensity, focus and drive,” a CCAS spokesperson said.

“Stella’s first year in triathlon as a talent transfer athlete from athletics and Surf Life Saving has seen some fantastic results, with many podium positions.

“Stella has worked hard to increase skills on the bike to be able to match her swim and run abilities.

“This determination, drive and enthusiasm is making Stella a well rounded triathlete.

“The only Nationals race that was able to take place in QLD last December, saw Stella make the A final in Youth Girls in a very tough field of athletes in her first National Level Triathlon Event.

“Stella was actively involved in almost every session that CCAS provided during lockdown, again determined to keep the training going through unprecedented times.

“In more recent achievements, Stella has qualified for the Australian Age Group World Championships Team in Duathlon, should the event go ahead in the Netherlands.

“She was also a part of a team of four crowned as State Silver medallists in the Mixed Team Relay, a new addition to the sport in the next Olympics.

“Stella races with intent, is dedicated to her training and strives to excel in the sport, and yearns to understand the technical and tactical components of racing.”

Miles and Kelly picked up their Chairman Awards for their unyielding dedication to their sports.

“Olivia has been an integral member of the CCAS Netball Squad and Indigenous Program for the past three years.

“From the moment she was selected, her genuine excitement and passion for netball was unmatched.

“Olivia’s hard work and dedication to the program saw her earn the spot of Vice-Captain of the squad in 2019, beating out many older athletes for the top spot.

“She is always willing to put in the extra effort and support the coaches, managers, CCAS office staff and her fellow athletes in any way that she can.

“We are extremely proud of Olivia and thank her for her dedicated service and contribution to the netball program over the last three years.

“Brianna has had an outstanding season with the CCAS.

“Brianna is a three-year graduate of the program and this past year she proved to be a strong guiding light for her teammates and younger athletes in the program.

“As a returning athlete, Brianna never used that as an excuse to ‘take it easy’ or slack off, rather she led by example and this is what the Chairman’s Award is really all about.

“She pushed herself every session to make herself and others better.

“This drive and hard work was rewarded with her selection in the Central Coast Crusaders’ Youth League Women’s team, which saw her play against athletes six years older than her.

“A true testament to hard work paying off and a very well deserved recipient of this award.”

Millers and Johnson received their gongs for excellence in leadership and development of their respective programs.

“Jason has been an enthusiastic and dedicated Team Manager of the CCAS Golf Program for the past four years.

“As manager, his passion not only for the game but for implementing its virtues into the lives of all the squad athletes has been infectious.

“His creed of building fun and friends for life shone through as he encouraged all to develop friendships with all they met through the program.

“He was also a supporter of bringing in the younger squad members to get a taste of more highly skilled training and to promote a mentor/buddy system with the older athletes.

“This instilled the idea of paying back and the responsibility of being an ambassador to the game of golf.

“He was always available to the athletes and it was never a trouble to lend a hand to the coaches.

“He helped to expand the competition by championing amalgamated district teams, so no child was left out even if the club they were at didn’t have enough to field a full team.

“Several of our squad athlete’s over the last few years have come from these teams as they have grown through the competition and taken on the challenge to improve further.

“Jason has been a significant reason for the success of the golf program over the last few years, encouraging athletes to join the program, he has also been responsible for the growth of junior golf in the district.

“The CCAS is extremely fortunate to have the support of Jason as the recipient of the Ray Sandell Dedication to Sporting Excellence Award,” the spokesperson said.

“When it comes to experience look no further than the extensive background that Brett Johnson brings to the UAA Hockey Program.

“Thirty-five plus years of involvement in the sport, a QLD representative and Australian National Champion, an Australian Institute of Sport Scholarship holder, an Australian representative (1995) capped six times, a person who has toured quite extensively throughout his playing career and more recently, his coaching and administrative drive for the sport, is possibly second to none on the Central Coast.

“Brett Johnson brings this level and wealth of experience and passion to the UAA Hockey Program.

“In 2015, Brett also took on the difficult task as President of the Central Coast Hockey Association, a position he holds to this day, and a person who has overseen significant governance changes along the way.

“Brett holds this position whilst committing considerable time on the field as a highly valued coach.

“Brett’s coaching philosophy is very insightful, where he focusses on two major elements, the importance of sound basic skills and to be able to apply those skills as a problem solver.

“As a graduate of the AIS, his understanding and exposure to fundamental skill development and the importance they hold at all levels of the sport was ground into his development.

“Brett encourages his athletes that sport is played in an ‘open’ learning environment, there are no predictable outcomes, the playing aspects are always changing and players have to adapt their own game to be equipped to solve the problems that arise in games with open skills.

“Brett has been involved with the CCAS for the past three years, and in that time, his drive, passion and commitment to the local athletes has mirrored his own success in the sport.

“It has been nothing less than exceptional.”

The Awards concluded with the induction of three new CCAS Life Members in Jan Mayfield, Carolyn Kay and Ian Robilliard.