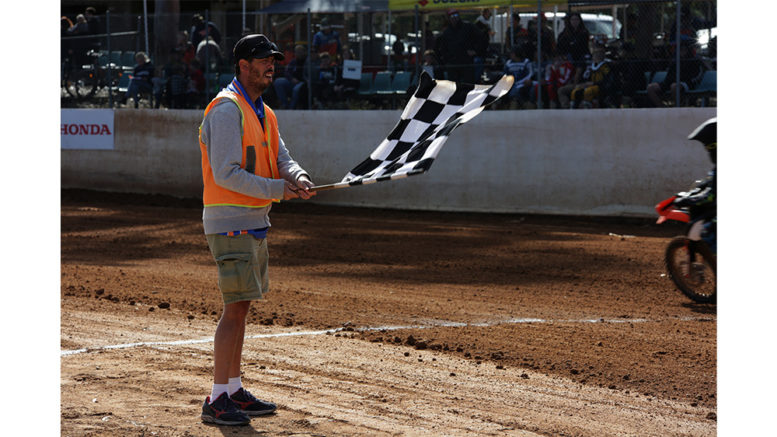 When it comes to supporting your favourite club you’d be hard pressed to find a man more loyal than Josh Street.

The Anna Bay resident, who lives with Williams Syndrome, has been making the journey to and from his home to the Coast to support his beloved Central Coast Junior Motor Cycle Club Inc. (CCJMCC) for the past 22 years, and now the Coast’s favourite flag marshal in training has been honoured with a special award.

For his tireless dedication and enthusiasm, Street was the recipient of the club’s highest honour, it’s 2020 President’s Award, and according to CCJMCC President, David Smith, there was no one more deserving.

“I’m not exactly sure how long ago I first met Josh, but I know he knew who I was before I knew who he was,” Smith recalls.

“He would always walk past me and say, ‘Hi Dave’.

“He would go to the same spot by the fence, sit and watch the races, play with his matchbox cars and always be ready to watch the next race.

“The only time he would leave his spot was to see the ladies in the canteen for one of the world’s best hamburgers or to congratulate a rider on a good race.

“Over the years, Streetie has become a club legend because of his enthusiasm and knowledge of all the riders.

“He is the proudest winner of our Most Enthusiastic Spectator Award, so the club was sad to lose contact with Streetie when the racing family he would come down with stopped coming.

“But last year, I heard a familiar ‘Hi Dave’ and there he was.

“Streetie had asked his carer to bring him down to Allen Park.

“When he turned up at the next meeting in a club shirt he’d grown out of, we presented Streetie with a new shirt and introduced him to our 2019 President’s Awardee, Col Adams.

“I asked Col if he could look after Streetie for a few races and let him wave the chequered flag.

“He took to his duties like a champion and did not miss a lap, and he knew when the finish white line had to be done.

“The way he waved the chequered flag, I’m sure that his arms would have been sore for the next few days.

“For doing such a great job, one of our riders took Josh on a thankyou lap around the track and after that you couldn’t wipe the smile off his face,” Smith said.

Eleven months on and Street is still a gun on the flags and still just as passionate about the CCJMCC as he was as a wide eyed 8-year-old.

The club’s unofficial relief marshal, Smith said everyone in CCJMCC took great pride in having Street as a member and a friend, with riders keen to see him out on the flags when racing picks back up next year.

“Josh, thanks for being you from all your mates at CCJMCC,” Smith said.