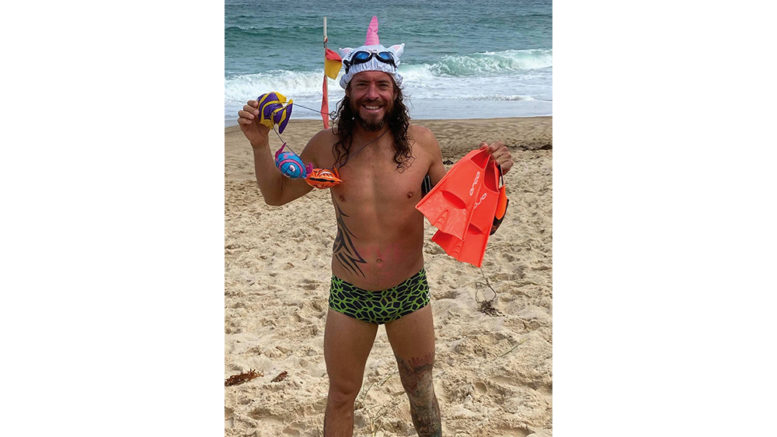 The Budgewoi local came ashore at Budgewoi Beach just after 3pm on December 22, bringing to an end his epic ocean swim that’s seen him freestyle his way up the coastline to raise funds for his beloved Camp Breakaway.

Departing from Soldiers Beach at 10am, Dorf’s trademark pink cap and zinc signalled his arrival at Budgewoi.

Spent but smiling, Dorf, who last year walked from Budgewoi to Brisbane to raise funds for mental health services, said he was thrilled to be finished with his latest charity adventure.

“It was exhausting and at times it was frustrating, but now that it’s done, I just feel this huge sense of achievement and I’m so glad that I was able to raise a lot of awareness and funding for Breakaway.

“I’m also really glad that I don’t have to put on this wetsuit anymore,” Dorf said.

His time in the water taught him many lessons but Dorf reckons the most important was self-awareness.

“I had a lot of time with my own thoughts out there and while it was tricky, I think it’s really helped me with my mindfulness.

“There was always something to worry about out there, what’s the weather doing, am I hydrated enough, sharks, but I just focused on taking it one stroke at a time because there was no use stressing over the unknown.

“At the very least, it was good meditation practice,” Dorf said.

With his journey now over and fundraising still ongoing, Dorf said he’d be spending the next few weeks on dry land.

The larrakin is also pleased that his big swim had helped bring the community together and open people’s eyes to the joy of giving.

“Since I announced the swim, I had people donating all sorts of things to help me and of course people were donating to Breakaway, and since I started swimming, I’ve had people come out and swim with me, give me and my support crew a place to bed down, a meal or just some words of support, and that has really meant the world to me, seeing a strong, loving community in action.”

“Mick has been by my side every step of the way and I wouldn’t have been able to do this without him.

From day one to day done, we did it together and I take my (swim) cap off to him.”