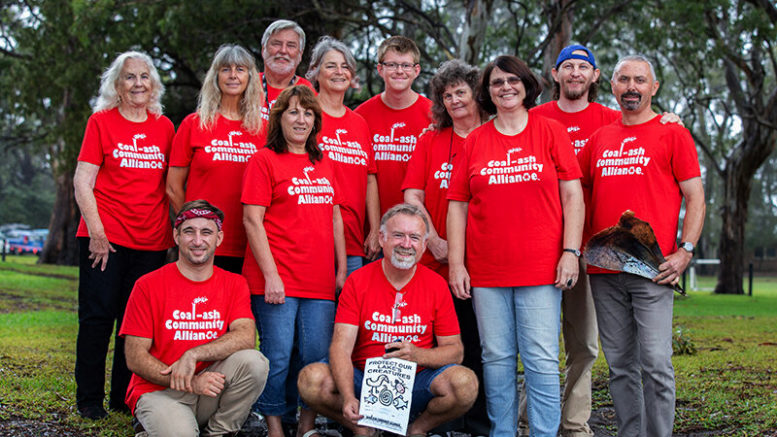 The team at Coal-ash Community Alliance

Spokesman for CCA, Gary Blaschke, said the group was very excited to receive the national award from the group of environmental lawyers, Environmental Justice Australia (EJA), as announced at the awards ceremony on Wednesday, October 28.

EJA Chief Executive Officer, Nicola Rivers, said this special recognition was reserved for an individual or group who had made an invaluable contribution to environmental justice.

“That’s all about righting environmental wrongs, fixing bad laws, championing public participation and standing up for our air and water quality and wildlife, and the beautiful natural places we love,” Rivers said at the ceremony.

Blaschke said CCA was a relatively new environmental group in the northern Central Coast and Lake Macquarie regions which was punching well above its weight when it came to protecting the environment, lakes and residents from the bi-products of burning coal at Vales Point and Eraring power stations, in particular the coal ash stored in massive unlined dumps.

“We feel very honoured to have been chosen for this award and before anything else, we would like to acknowledge those who have looked after these lands and waters since time began, our traditional owners and their Elders, past, present and emerging.

“Receiving this award would not be possible without the support from many people, first and foremost those at Hunter Community Environment Centre, but also the many Lake Macquarie Sustainable Neighbourhood Groups and all the committed local members of the Coal-ash Community Alliance itself,” he said.

“These committed members put in time and effort to protect our community and environment from the often hidden impacts of more than 60 million tonnes of coal ash stored in our region between Vales Point and Eraring power stations, which are leaching heavy metals into the surrounding waterways.

“We hope that our communities recognise the efforts of the CCA and support us in working towards reducing the massive stockpiles of coal ash by convincing the authorities to reuse a greater amount of the ash produced today and to develop industries that process the store ash into safe and useful products and create jobs in our region.

“The CCA thanks Environmental Justice Australia for this esteemed recognition and commits to ongoing actions that will help cleaning up our local neighbourhoods and regions,” Blaschke said.