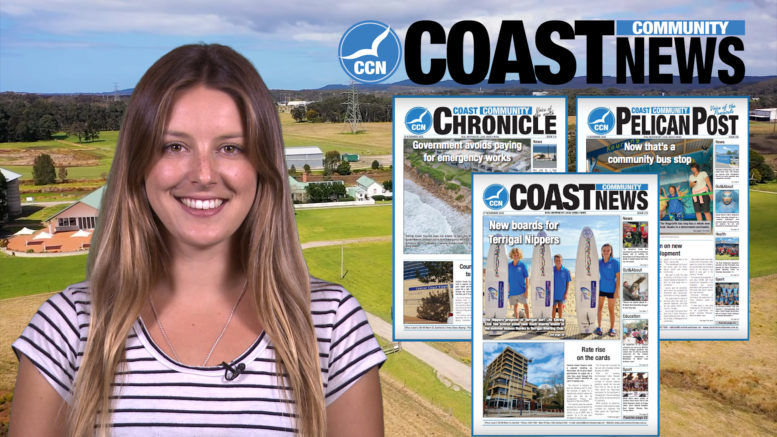 Central Coast News: On the program this week, Council is set for some major restructuring, a new COVID test lab opens in Gosford, fresh employment data, a train strike, footpaths, fishing licences and later on we speak with an award-winning cheesemaker, a new kind of SWAMP at Pioneer Dairy, Wyong and Opera, afloat. But before all of that, first, let’s go to David for a rhyme or two about this week’s council news.

Hi I am Jacinta and you’re watching Coast Community News 5@5 November 27 and before we start, Happy Thanksgiving to all of our 500 odd American viewers.

Well last week we spoke about a possible rate rise which might happen if the decision put forward by the Council Administrator Dick Persson is approved by the Independent Pricing and Regulatory Tribunal, or IPART. But on top of that, he also mentioned a major restructuring of council management, We were there to ask Dick and Ric the tricky questions about how the council intends to tick.

In randomly unrelated news, Minister for Agriculture, Adam Marshall visited the region to remind fishers to abide by the rules and over 11 more ambulances will be rolled out across the Central Coast ready for summer.

Commuters were disrupted this morning when the Rail, Bus and Tram Union called a stop work meeting regarding proposed staffing reductions on the new intercity fleet. Fortunately the strike was cut short. We’ll have more on this developing story in next week’s 3 papers.

Back on the ground a 500 strong petition for a footpath has been made by the locals of Killarney Vale to The Entrance MP David Mehan. We went along for the hand over.

Now lets shoot back to David for this week’s data crunching, thanks to SeeChange data Analytics in Gosford.

Thanks JC, some improvements in the local job market have occurred across the Central Coast in October. As you can see from this graph a decrease in the Number of Jobseekers by 1,017 people.  Numbers are still high, sitting at 18,868, yet there has also been an increase in Central Coast jobs vacancies advertised, climbing to 1365 in October. Check the business section of our website for a more complete picture.  Here’s Hayley with sport, weather, and cheese.

The 2020 Women’s State of Origin clash saw seven Central Coast locals compete in the competition, along with Wyong Roo player Tarryn Aiken for the Queensland Maroons.

Aiken proved indispensable for the Maroons, who made NRLW history by claiming their first ever Women’s State of Origin title since the contest’s rebranding in 2018.

Aiken’s performance would also see her awarded the Nellie Doherty Medal as player of the match.

The Watanobbi local took the match via a six round TKO to bring his perfect record up to 20-0 after almost a year out of the ring.

The Central Coast Mariners will kick off their 2020/21 A-League campaign with a blockbuster F3 Derby at Gosford on New Year’s Eve.

The FFA confirmed the upcoming 26-round season’s fixtures on November 24, with the Mariners set to play 13 games at Central Coast Stadium, beginning with the derby against the Newcastle Jets.

A busy start to the schedule sees the team play nine games in the first 38 days of the season, with five home clashes, but Head Coach, Alen Stajcic, said the team is ready for the challenge.

And now let’s have a look at the weather

It’s time to slip slop slap this weekend with a UV index predicted to sit at extreme levels between 11.2 to 11.5.

Saturday will be a max of 36 with winds northeasterly 25 to 40 km/h. And Sunday will do one better with a very hot 41 degree day. There will be a slight 20% chance of a shower and a thunderstorm with winds north to north westerly 15 to 20/ km/h, shifting southerly 30 to 40 km/h during the afternoon.

And now… pass the crackers Gromit. Central Coast-based cheesemakers Little Creek Cheese has gained a national reputation this week with a further 11 awards. We dropped in to quiz chief cheesemaker Russell about his cheesy secrets.

What’s in a swamp. Well this interview we had with Sue Bradley and the team from SWAMP, standing for the Sustainable Wetlands Agriculture Makers Project told us what their exciting new project is all about.

All of these stories and millions more, maybe not that much, but pretty close, are on our website so make sure you check them out. Don’t forget to pick up a copy of this week’s Coast Community News, Chronicle and next week’s Pelican Post. Please subscribe to our Social’s for updates during the week.

Thanks for watching, see you next week.