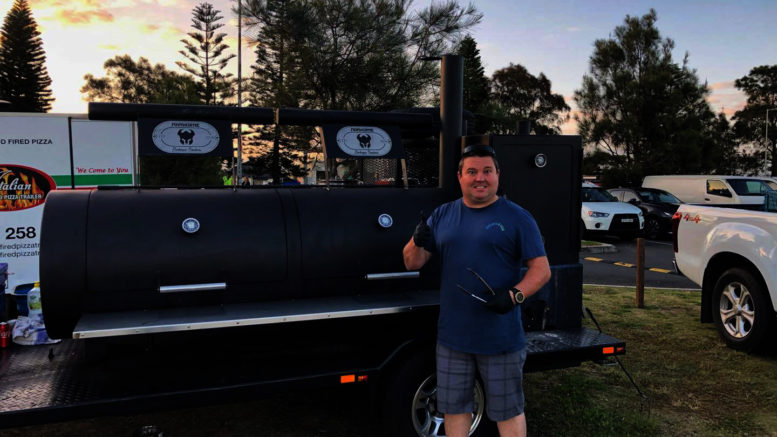 Central Coast Pitmaster, Daniel Lynn, is a contestant on the cooking show, Dippers Backyard BBQ Wars, airing on 7mate each Friday at 2 pm until December 4.

The eight-episode show revolves around seven Pitmasters who are judged on their performance, cooking a different cut of meat on a barbecue each week.

“They invite four master brewers from around the country and pair a beer with our food, so it is a homebrew back-yard barbecue war,” Lynn said.

“The experience of filming for a television show was really good, but it definitely made you look at cooking shows differently as you can see the stresses behind the scenes.

“You try to do a really good job, but you also have to play to the camera.”

He sells brisket, pulled pork, ribs, burgers, and fries at events all over NSW.

Lynn said his love for barbecue began when he used to help his father cook when he was young.

“I started my first fire when I was eight years old, and from the age of 10, I was able to light the barbecue and be in control of the cooking,” he said.

“My father used to come down and have a beer, and we used to cook barbecue together.

“I always felt like the cooking process used to be too quick, so I would try to cook the sausages slower and at a lower temperature because I liked the idea of the barbecuing.

“It was always the idea of wanting to cook a really good barbecue but also making sure you take your time with it because the American low and slow style was the part I enjoyed the most.”

Lynn said the part he loves most about cooking around a barbecue is that it brings people together.

“People don’t really come together over a wok,” he said.