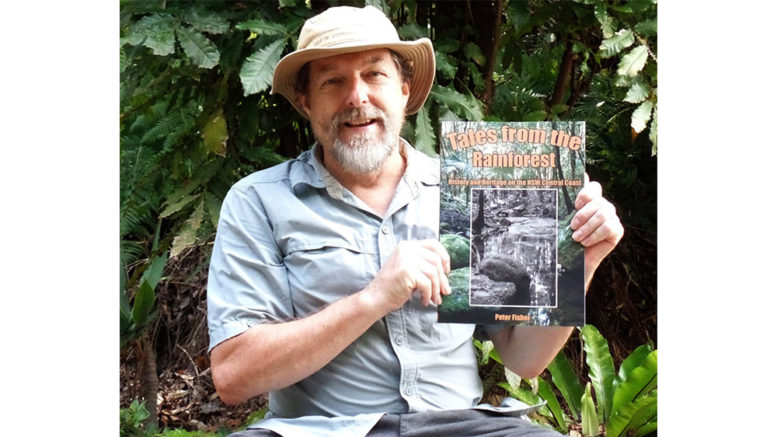 Peter Fisher with his book

It’s been four and half years in the making, and now Tascott resident and former schoolteacher, Peter Fisher, has celebrated the release of his first book, Tales From the Rainforest: History and Heritage on the NSW Central Coast.

The book, which details many of the various rainforest patches and gullies found in the region, including their history and heritage, was launched at Henry Kendall Cottage and Museum on November 14.

Fisher moved from Canada to the Central Coast in 1987 and has since been exploring the area’s natural habitat.

“After moving here, I realised part of the property I was living on has remanent of a rainforest gully,” he said.

“I am a bushwalker and a hobby photographer and have spent lots of time going through many of our rainforest patches.

“I decided I wanted to look into all of the things I had looked at and poked at whilst bushwalking.

“I have always wanted to write a book, so when I retired, I decided it was the time to write that book I was always talking about.”

The factual 230-page edition includes introductory chapters on rainforests, people in rainforest, and examples of flora and fauna, as well as the little-known Central Coast fern exporters of the 1880-1930s.

“We have far more rainforest here than most people realise,” Fisher said.

“I would love for people who are reading my book to go and explore some of these areas and to help protect them.

“Some of the history and fascinating tales associated with these areas proved amazing, yet most are generally unknown and have never been published before.”

Other topics in the book include the Henry Kendall engravings at West Gosford from Christmas 1874, Professor Mouat and his plans to build Roman-inspired gardens next to Capper’s Gully at East Gosford, and the current working Patonga farm which stands on the site of an extinct volcano, which at one time also sheltered a substantial rainforest.

“At the launch, we had the Member of Gosford, Liesl Tesch, Head Gosford Librarian, Geoff Potter, The President of Brisbane Water Society, and 30 other guests,” Fisher said.

Books can be ordered by emailing peterfishercentralcoast@gmail.com.