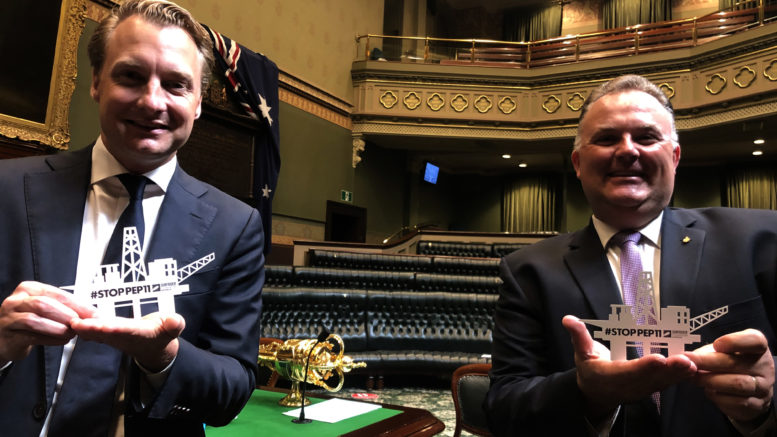 Parliamentary Secretary for the Central Coast, Adam Crouch and Member for Manly James Griffin show their opposition to PEP 11

The prospect of gas industry rigs establishing themselves off Central Coast beaches has hit a major hurdle with Federal Liberal MP for Mackellar (Northern Beaches) tabling a motion to oppose an extension to the Petroleum Exploration Licence 11 (PEP11).

Member for Dobell Emma McBride(Labour) will be supporting the motion to deny PEP11 set to be raised in Federal Parliament on Monday October 19.

PEP 11 is due to expire in February, 2021, and if renewed would allow for drilling for gas off a large part of the eastern seaboard of NSW, including the Central Coast.

The motion also has the support of MP Zali Steggal, who presented Save Our Coast’s 61,000 strong petition calling for an end to PEP 11 to Federal Parliament earlier this year.

“I’m on the speaking list … and will be speaking in support of the motion,” McBride said.

“I pushed for the motion to be raised in Parliament and it will be debated on Monday.

“I’ve had a lot of conversations with our community about this proposal and have serious concerns.

“I’ll have a lot more to say during the debate in Parliament.”

Save Our Coast has called on Member for Robertson Lucy Wicks to also support the motion.

Wicks was approached for comment but did not reply prior to deadline.

Save Our Coast founder, Natasha Deen, said it was “incredible” to have Liberal MPs from Sydney’s Northern Beaches move a motion to end PEP 11.

“This could not have happened without thousands of supporters inundating MPs with requests to end PEP 11,” she said.

“The flawed and devastating plan to drill for gas off our beautiful coast has naturally been met with concern and outrage from communities.

“Together we stopped seismic testing off our coast.

“We united en-masse to stop inhumane blasting for oil or gas off our coast.

“However, if PEP 11 is renewed, oil and gas companies could reinstate seismic testing at any time.

“We need to continue to speak up so that PEP 11 is not renewed, for the sake of climate, livelihoods, economy, wellbeing and way of life.”

“The PEP 11 is located in Commonwealth waters off the NSW coastline between Newcastle and Sydney,” Crouch said.

“It is regulated by the Commonwealth Offshore Petroleum and Greenhouse Gas Storage Act 2006.

“I must emphasise that the Commonwealth Minister for Resources, Water and Northern Australia – not the NSW Government – has the power to grant or deny approval for the PEP 11.

“The NSW Government has previously indicated its opposition to any extension of petroleum exploration permits off the Central Coast.

“The NSW Government has also previously indicated to the Commonwealth Government its concern about the potential impact of the PEP 11 on marine life.”