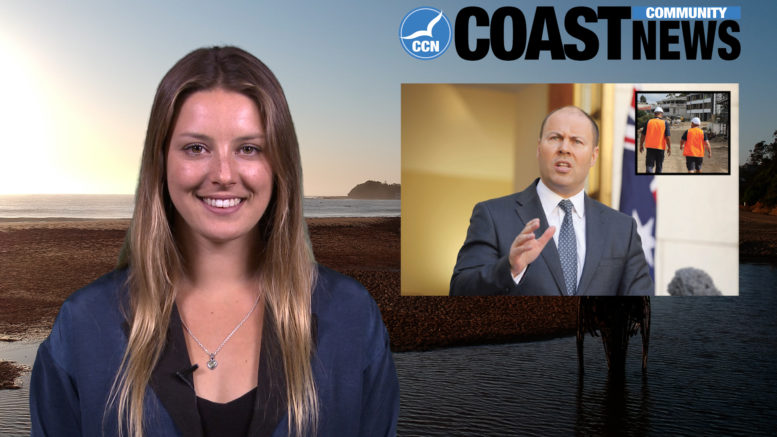 Hi I am Jacinta Counihan and you are watching Coast Community News 5@5 October 2.

Many Central Coast workers will be doing in tough in the coming weeks, with Jobkeeper payments cut back on Monday. Payments have been reduced from fifteen hundred to twelve hundred dollars a fortnight for full-time workers, and sevn hundred dollars a fortnight for part-time. Senator, Deborah O’Neill, spoke with Coast Community News and said these changes would significantly affect the Central Coast Economy.

NSW Minister for Families, Communities and Disability Services, Gareth Ward, was on the Coast this week, revealing how NSW has the largest social housing building program of any State or Territory in the nation. Compass Housing is currently constructing 157 new homes across the Central Coast, including at Gosford, Toukley and Long Jetty. and the Minister announced a new social housing program for the local aboriginal community.

The data on housing

A high demand in rental properties in the region is causing prices to rise and vacancies to drop. Let’s go to David who has more on the issue.

This week we look at the data around building approvals and how they correspond to homelessness and rental vacancies.

Thanks to local data analytics firm SeeChange we can see from this infographic. AIHW data from 2019 shows that the Central Coast LGA has the highest homelessness count in NSW. And ABS data from June 2020 illustrates that the Coast also has one of the lowest rates of building approvals in Australia.

It’s worth noting that both datasets don’t fully take into account the COVID period, which is expected to show a worsening in homelessness and rental stress. [building approvals graph]

Another important factor this graph illustrates is that the Central Coast currently has very low residential rental vacancy rates, with locals being pushed out of the rental housing market due to demand from Sydney. This lack of available supply is also driving up rents, reducing affordability and driving the risk of homelessness.

This week Council endorsed the Draft Economic Development Strategy 2020-2040 and the Economic Recovery and Resilience Framework, which states: “The long-term objective is that by 2040, the Central Coast will welcome nearly 88,000 new residents, grow the economy by over $21 Billion, and create over 72,000 new jobs from the pre-COVID-19 baseline”

Which is interesting because even with the current (flat) population growth, we are running out of housing (and don’t have enough jobs).

The long-awaited water quality survey for Terrigal Beach has been released today, one of the largest and most thorough water audits in the state’s history. We spoke to Parliamentary for Secretary Adam Crouch.

Year 12 students on the Central Coast are coming into their last break before their final exams, having finished up 13 years of schooling. Let’s go to Jacinta to find out whats on these holidays that they can get up to.

Thanks David, yes kids in the region can cool down these holidays at the new state-of-the-art play park at Woy Woy Peninsula Leisure centre. The one million dollar nautical-themed splash park is equipped with tipping buckets and interactive features, expecting to attract plenty of tourists and residents these holidays.

And if you are down at Terrigal Beach near the lagoong, don’t forget to check out Pete Rush’s, newest masterpiece, the Reflection Weaver. Coast Community News spoke with him earlier this week about how the half-human, half swan, came to be.

And Hayley, plenty has happened in the sport this week…

And the Central Coast Roosters reign supreme after they claimed their premiership title in the NSW Women’s Rugby League Competition. The undefeated Roosters took the title following a 16-10 win over the North Sydney Bears at Parramatta’s Bankwest Stadium over the weekend.

And onto Rugby Union with what’s set to be the grudge match of the season. The Lakes will meet Ourimbah to determine who will verse Terrigal in the Grand final of Central Coast Rugby Union’s First Grade Competition. It comes after Terrigal secured their spot in the grand final after beating The Lakes 33-14 in the major semi-finale over the weekend, while Ourimbah defeated Hornsby 32-26 in the minor. And now to Sasha for the weather.

[Sasha] It looks like it’s going to be a warm and sunny long weekend for the Central Coast.

Saturday will be warm with a max of 27 and light northeasterly winds of 15 to 25 km/h with an increase to 25 to 35km/h in the afternoon.

Sunday will be another sunny day with a max of 28 and the winds will be north to north easterly around 20 to 30km/h.

Onto Monday, with a sunny start and a max of 29 degrees with cloud cover increasing throughout the day. There’s a slight chance of evening rain with winds northerly and around 20 to 30 km/h shifting southerly to 20 to 25 km/h during the evening.

And it will be a big weekend on the beaches, back to you Jacinta.

Yes thanks Sasha, the long weekend is sure to bring in the crowds. The raising of the flags at Ocean Beach occurred last Saturday, signalling the start of the 2020/21 surf living saving season so make sure you swim between the flags and stay safe.

All of these stories and thousands more are available on our website and remember to pick up a copy of this week’s Coast Community News issue number 262 and Coast Community Chronicle 208. Be sure to subscribe to our Social’s for updates during the week.

We leave you today with big news, one hundred and 80 KILOS big to be exact. One of the oldest animal residents on the Coast, Hugo the tortoise, has celebrated his 70th birthday. The Australian Reptile Park made him a cake of his favourite fruits which he enjoyed at his party.

Thanks so much for watching and we will see you next week, have a great long weekend.

Access all our videos stories here at our video news section.

The Entrance Ocean Baths to be named after Grant McBride