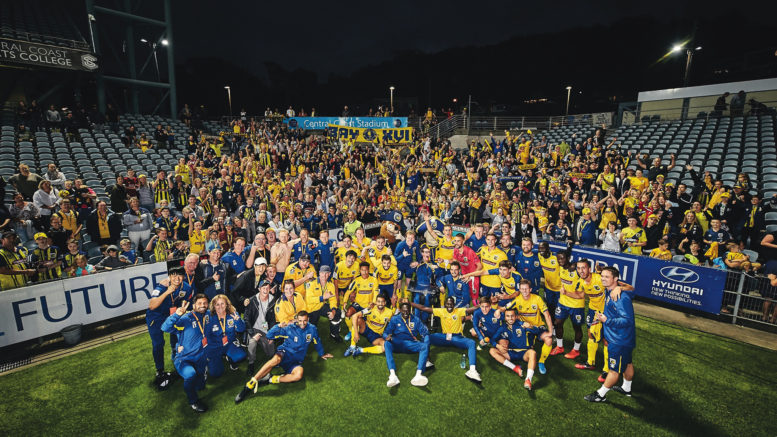 Central Coast Council has committed to working with the Mariners on a potential five-year agreement which would see the A-League football club remain in the region.

The Council confirmed its support for the club at a crisis meeting held on September 29, attended by business leaders, members of the football community and local MPs as well as Council CEO Gary Murphy and Mariners CEO Shaun Mielekamp.

The meeting was called amid fears the club, which is up for sale, could be relocated outside the region, with an offer already on the table from Canberra.

Mayor Lisa Matthews said Council valued the contribution made by the Mariners to the Central Coast and was keen to work with the Club to ensure it remains and thrives in the region.

“We have expressed our commitment to working on what a potential five-year agreement between Council and the Mariners might look like,” she said.

“Council will reach out to Regional Development Australia and Destination NSW to see if any agreements can be created to support the Mariners and to help secure their future on the Coast.

“We will also be contacting the State Government to explore the possibility of providing free public transport for spectators to attend games so our community can really get behind the Mariners as well.”

Mielekamp said the meeting had been the first opportunity to bring all stakeholders together and talk seriously about the future of the Mariners on the Central Coast at such a crucial time.

“I am confident that this is the start of meaningful collaboration and tangible outcomes, as all parties at the meeting vowed to find a way to make a difference and contribute,” he said.

“The aim was to find enabling actions and immediate quick wins that will secure the Mariners’ venue hire agreement at Central Coast Stadium for another 5-10 years and seek a solution to creating a single venue home base for the CCM Academy and its 430 youth.”

Mielekamp said more meetings would be necessary, with not all State and Federal MPs able to attend on September 29.

Mielekamp thanked Council for a “swift and dedicated response” which showed genuine commitment and intent to keep the club on the Coast.

“The most empowering part of the meeting was the opportunity to hear directly from the football community,” he said.

“With representatives from Central Coast Football, CCM Official Supporters Club and the newly forming CCM Supporters Trust it was a great opportunity to express to all parties the magnitude of football on the Coast, a sport that represents over 15,000 participants and contributes over $25M to the Central Coast economy.”

Director Roads Transport Drainage and Waste, Boris Bolgoff, said Council had invested over $6M in the home ground for the Mariners – Central Coast Stadium – over the last three years and wanted the Mariners to be an important part of the region’s future.