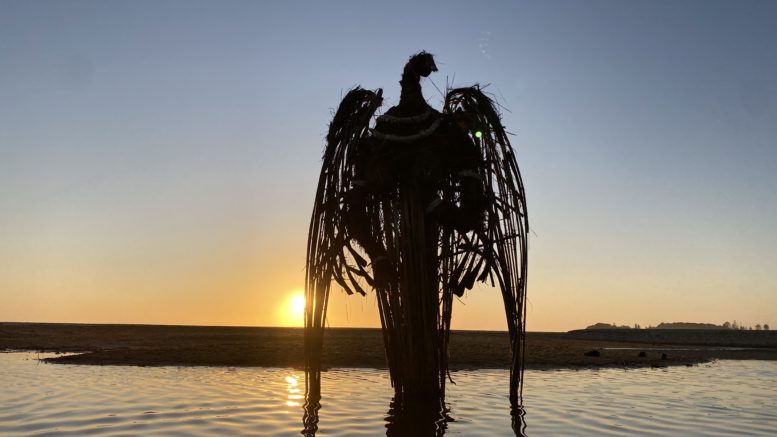 The half human, half swan made of palm fronds is anchored to a concrete block in the Terrigal lagoon inlet and took four days to complete.

Rush originally started the sculpture in Macmasters lagoon but moved it to Terrigal as it would not stand up in the mud.

“The concept came from when I was looking across the lagoon at the reflection and I noticed on this particular day the reflections looked like fine horizontal lines which reminded me of a thread.

“And then I thought, wouldn’t it be a weird thought that the reflection is not a trick of light but rather it is woven.

Many of Rush’s artworks evolve from an original idea, however he completed a detailed sketch of this concept before he commenced

“I came up with this figure that had long arms and fingers to reach up and make this reflection on the under surface of the water.

“I knew it would probably have a swan neck because the creature would want to look up through the water and see what it was copying.

“Another advantage of it being a swan was so people won’t know it is a weaver when it looked above water as it had a swan neck – that was my concept.

This is a CCN digitally enhanced article.

Rush Hour … on the beach