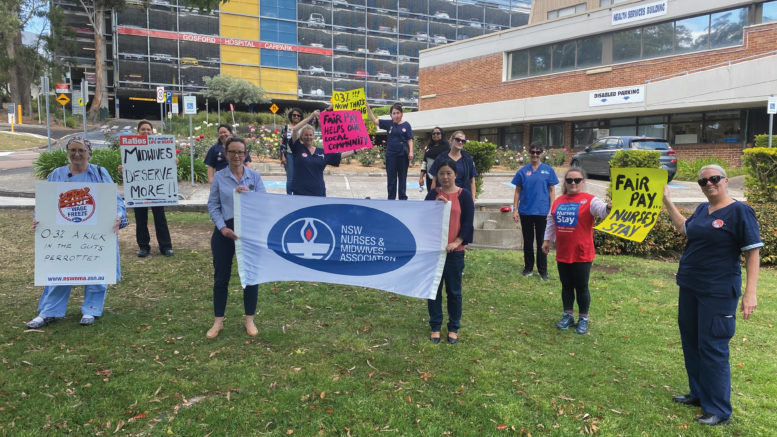 Central Coast members of the NSW Nurses and Midwives’ Association (NSWNMA) gathered outside Gosford Hospital on October 8 to express their anger at the State Government’s virtual wage freeze for public sector workers.

On October 1 the NSW Industrial Relations Commission awarded a 0.3 per cent pay increase for the sector, which includes health workers, teachers, fire fighters and police – well below the expected 2.5 per cent annual rise.

NSWNMA Acting General Secretary, Judith Kiejda, said members were shocked by the decision, having campaigned against the freeze for the past six months.

Kiejda said the outcome was outrageous in light of the efforts of nurses and midwives during COVID-19, with some members forced to accept an increase of just 7 cents per hour, or $2.90 per week.

“This is bitterly disappointing for NSW nurses and midwives who have sacrificed so much in one of the toughest years of their careers,” she said.

“Other states including Victoria, South Australia and Queensland have agreed to pay their nurses and midwives accordingly while NSW would rather spend money on fireworks – it’s outrageous.

“The NSW Government is one of the largest employers on the Central Coast and the region desperately needs support to overcome the economic impact from the pandemic.

“By imposing this wage freeze, the Berejiklian Government is inflicting more harm on the local community and its efforts to recover.”

Member for The Entrance David Mehan said the 0.3 per cent pay rise was “very disappointing”.

“The government is doing all sorts of things to stimulate the economy, but wages of public servants would be largely spent locally,” Mehan said.

“More wages for public servants would have been a good way to help the region’s economy.

“We haven’t been presented with any government action directed at the Coast beyond public works which were already scheduled and/or underway prior to the pandemic.”

“It’s a huge blow to the economy,” McKay said.

“Public sector workers including nurses, police officers, teachers, cleaners and corrective service officers have kept us healthy and safe during the pandemic.

“We maintain that the economic benefit to the whole state of a 2.5 per cent increase is essential, it’s even the view of Treasury that this wage cut will deepen the recession.”

The Australian Workers’ Union (AWU) has also criticised the “miniscule” increase, which it says is a pay cut in real terms for National Park firefighters who “put life and limb on the line during the State’s bushfire disaster last summer”.

“The heroes of the worst bushfire in living memory deserve proper reward and recognition. Instead the Treasurer is scattering crumbs from the table,” Walton said.

“This is a horrendous decision.

“For most of our members in National Parks, Forestry Corporation and Park Air this will amount to three or four dollars a week.

“This unfair decision (is) also economic stupidity,” he said.

Pay rise was signed, sealed but not delivered

Ausgrid propose a one year wage freeze and 200 redundancies