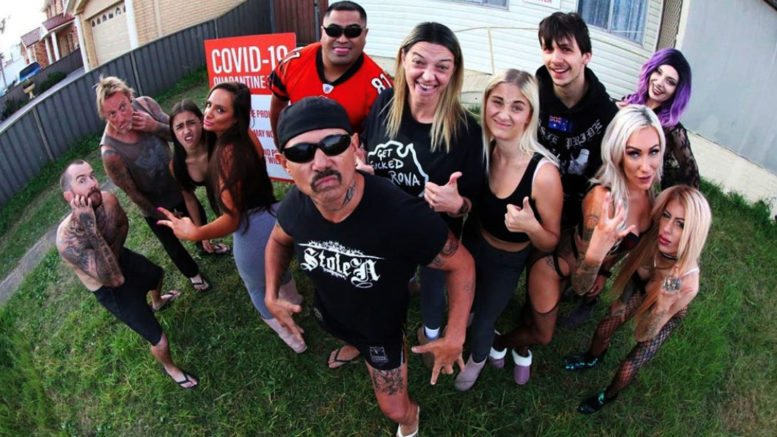 Kyrah Brock-Fenton (fifth from the right) with the Housos cast

Central Coast uni student Kyrah Brock-Fenton got to watch herself in her first TV acting role on October 26, as the third season of the Australian comedy television series, Housos, premiered on 7Mate.

The Newcastle University Ourimbah Campus student appeared as Shazza’s daughter, Holden, on the show’s first episode back since 201.

“It was such an amazing experience watching it back,” Brock-Fenton said.

“It definitely lifted my confidence, and I felt like I earnt my place with the rest of the cast.

“All of the nerves and the weirdness quickly went away as (I saw) how all those hours of filming turned out.

“My friends and family are all super proud of me, and I feel so grateful they watched and enjoyed it.

“They all thought I was funny, so I felt like I did my job.”

Housos is a satirical parody of low-income Australian residents of fictional suburb Sunnyvale who are living in Housing Commission public housing.

Brock-Fenton said the filming of this year’s “Lockdown” season was incredibly fun and a great step forward in her acting career.

“I am finishing my first year of a Bachelor of Education Secondary, English and Drama at UON’s Ourimbah campus,” she said.

“I would love to be a drama teacher one day, but I would also love to continue theatre acting and musicals and get into more TV and film work.”

She was able to secure the role only one year after graduating from the Hunter School of Performing Arts in Broadmeadow.

“My character, Holden, is pretty much a younger version of her mother, Shazza, and is not exactly a ‘model student’ but more of a catalyst for discussion,” she said.

“It was fun to film as I was able to let loose and say and do things that are usually not acceptable and very out of my personality.

“Observing the filming process, and how the director, Paul Fenech, put everything together was amazing.

“It gave me some valuable insight into how the TV industry works.

“The whole cast are all so talented, especially in how they can switch between their character and themselves.”

Brock-Fenton is no stranger to the TV industry with her mother, Sharne Brock-Fenton, featuring in dramas such as Home and Away, Packed to the Rafters and others.

“Seeing myself for the first time on TV, I feel so much more confident, and it made me really proud of myself as I really do believe I deserve to be on screen,” she said.