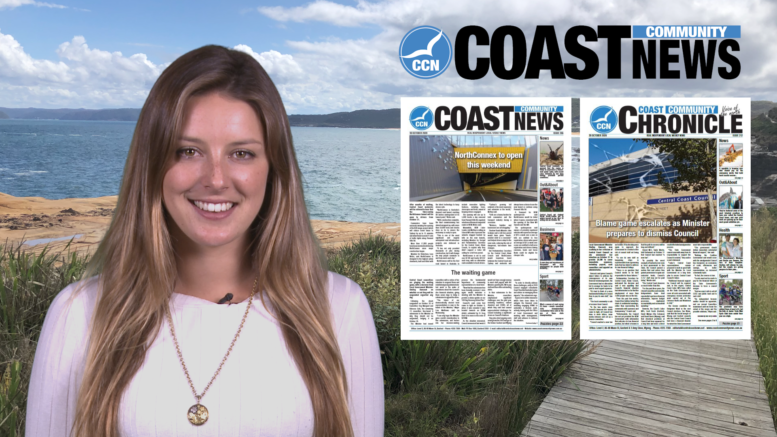 The Central Coast Council has been suspended for three months by Minister for local government Shelley Hancock and has appointed Mr Dick Persson as interim administrator. We spoke to Parliamentary Secretary for the Central Coast Adam Crouch about the announcement.

“I really welcome the Minister decision today and her acting so swiftly on this very serious issue,” Crouch said.

“Our community is breathing collective sigh of relief.

“It is too early to tell whether the Councillors will be reappointed after 3 months,

“The Minister is going to get that feedback from the Office of Local Government and the administrator so over the next three months there will be the pulling apart of all of the things that have happened and hopefully this will be made very transparent and open which should have been what happened in the first place.

After months of waiting, Central Coast motorists will be able to drive through the time-saving Northconnex tunnel from tomorrow. The opening of the 3 billion dollar mega-project will reduce travel times to Sydney by up to 15 minutes and allow drivers to avoid 21 sets of traffic lights along Pennant Hills Rd. The 9km tunnel is set to cost cars $7.99 and trucks $23.97 each way. It will also be the first in Australia to include lighting features such as trees, starscapes and birds, aimed at keeping drivers engaged.

The Greater Sydney Commission has hit the ground running, with two workshops held this week involving around 30 stakeholders. We asked Parliamentary Secretary for the Central Coast, Adam Crouch, about his impressions.

Stage 1 of the Bouddi Coastal walk has been completed featuring a new and improved track and stairs made of sandstone, costing the NSW Government $1.4 million. We spoke with the Director for Park Operations for Hunter, Central Coast Branch Kylie Yeend.

Learning to surf but have no board? For Terrigal beachgoers, this is no longer a problem, with Automated Activities having launched the world’s first automated surf hire system called Rabbits Surf Hire. Launched by 1978 World Surfing Champion, Wayne “Rabbit” Bartholomew, and locals, Peter Strain, Frank Oxley, and Rod Lennon, the system allows people to rent out either a surfboard or bodyboard from an automated kiosk located next to Terrigal Life Saving Club.

What a weekend of State Championship road racing our Central Coast junior riders had. There were four juniors representing the coast, Daisy Guthrie, Emma Blume, Nicole Duncan and Liliya Tatarinoff who were all in the same U15W’s category.  On day 1,  the 10km individual time trial, saw Nicole Duncan ride her best ever to win the silver medal. And The team time trial saw them finishing at a close second, with only three of the riders competing after Emma’s bike suffered a flat tyre 3km in.  Day 2 was the U15W’s 30km road race which saw Liliya take out the gold and Nicole in the third position. Despite the Junior Road Nationals being cancelled Cycling NSW has chosen both riders as NSW representatives to acknowledge their achievements.

It was heartache for Central Coast Heart in the semi-finals of the Origin Netball Premier League with both teams knocked out of the comp. The Opens went into the playoffs as the favourites to win, but it was not meant to be with North Shore United beating them 53-42. With two players out with injuries, Heart Club Captain Alicia Walsh said the Heart went into the match knowing it was going to be an uphill battle. And The Under 23s game was a back and forth battle between the Heart and UTS Randwick Sparks, with the Sparks taking the win 51-47.

Another wet one is on the way, with a partly cloudy, Spooky Saturday and a 70% chance of showers in the morning and afternoon. There will also be a chance of a thunderstorm and a max of 26. Winds will be easterly 15 to 25 km/h shifting northwesterly in the morning.

Kicking off the 1st of November with another cloudy day and a 70% chance of showers and a thunderstorm. There will be a max of 23 and winds easterly 15 to 25 km/h. The wind will pick up during the day changing southwesterly and reaching 30 to 45 km/h.

All of these stories and thousands more are available on our news website and remember to pick up a copy of this week’s Coast Community News issue number 266 and Coast Community Chronicle 212. Be sure to subscribe to our social channels for updates during the week.

And Finishing off this weeks 5@5, despite having to cancel the Coastal Twist festival, the Naughty Noodle Funhouse have found another way to bring the glitz and the glam to the shopfronts of the Peninsula. We spoke to founder Glitta Supernova and Co-Founder Juan Locco about what was involved.