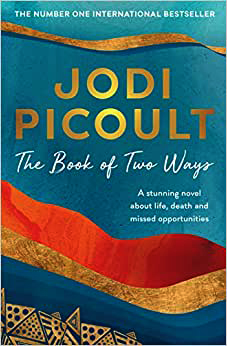 Dawn is married to Brian and has a teenage daughter, Meret.

They live in Boston.

Brian is a professor of physics at Harvard and Dawn works as a death doula.

I am not sure if that is a position in real life, but it should be.

Basically, she helps people transition from life to death – makes sure their dying wishes are granted.

Dawn’s latest client is Winifred, an artist who is dying of ovarian cancer.

Win’s dying wish is that Dawn find Thane, a former lover and father of Win’s son Arlo, who passed away three years ago.

Once Thane is found, Win wants Dawn to deliver a letter to make Thane realise how much Win loved him.

Talking to Win about past loves brings up memories of Dawn’s former lover, Wyatt and reveals cracks in her marriage to Brian.

Before marriage and becoming a death doula Dawn was an Egyptologist.

She was getting her graduate degree from Yale under Professor Dumphries.

Up until Dawn arrived, Wyatt was Dumphries’s pet student.

Now the two spar for attention and acknowledgement that they are the smarter student.

Dawn makes it obvious that she does not care for Wyatt.

But what would an Egyptologist be without a trip to Egypt, and it is there, in the hot sun, excavating ancient sites that Wyatt and Dawn fall for each other.

But fate is not in their favour as Dawn is summonsed away to care for her dying mother and her adolescent brother, Keiran.

With all the pressures of caring for a dying parent Dawn forgot about her life in Egypt and falls for Brian, who’s grandmother is dying.

The two of them comfort each other in their grief.

Brian is safe and comfortable.

They get married, raise Meret as well as Dawn’s brother, who ends up becoming a neurosurgeon.

Life goes along splendidly for fifteen years and then Dawn meets Win who brings all of these past choices back to the present.

While on a mission to deliver Win’s dying wish to Thane in London, Dawn takes a side trip to Egypt to see how old Wyatt is doing.

They rediscover each other and she reveals a secret.

They both head back to Boston when the plane crashes.

Are you still with me? It seems far-fetched doesn’t it?

Who does Dawn see as the plane goes down? What will her choice be?

The actual Book of Two Ways was found in certain coffins in Egypt and was a guidebook, a map, to assist the deceased with the afterlife, by either land or water routes.

By contrast, “The Book of Two Ways” by Jodi Picoult was pretty underwhelming.

First of all, the prologue set me off on a course that distracted me for about 80 per cent of the book.

Then, the descriptions about Egyptology and references to physics (quantum, astro, particle) were way too much.

I appreciate the importance of researching a novel, but this was too much – I scanned over most of it because it was like studying a text book and expecting an exam at the end.

The story about being a death doula was interesting, and I would have liked to see that part expanded, but the rest just wasn’t for me.

Other (less reluctant) reviewers say it is ‘a powerful story about heart-wrenching moral choices.’

Mmmm … I just saw a selfish woman who wants what she wants and doesn’t care who gets hurt.