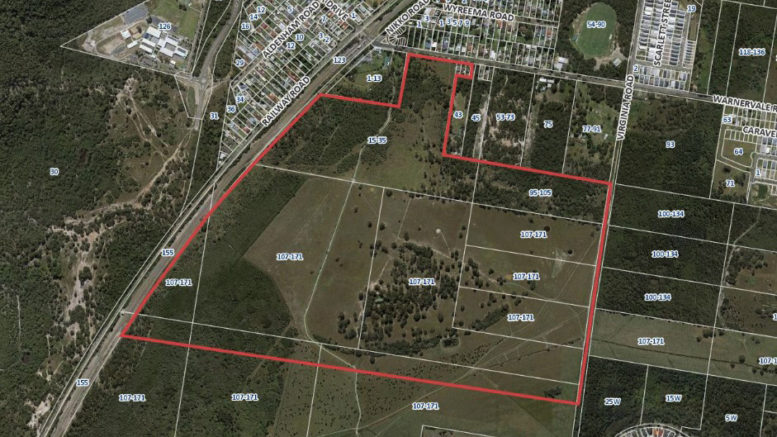 The 210ha site to become a housing estate at Warnervale

A 210ha housing estate at Warnervale was given the green light following approval to rezone the land at Central Coast Council’s meeting on October 19.

The parcel of land is 15-35 Warnervale Rd and 107-171 Virginia Rd, Warnervale, which is predominately clear and used for grazing livestock, and 150ha of floodplain.

Following a site visit by some councillors just hours before the meeting, the staff recommendation on the agenda was amended to add more emphasis on restricting use of flood prone land.

It is being developed by AV Jennings and the intended outcome is subdivision and development to accommodate a variety of housing types from single dwellings to medium density.

The overall masterplan for the site contains 526 lots.

Development consent was given in July for stage one of five lots and stages 2A and 2B for subdivision of 158 lots, one commercial lot, 14 residue lots and a wildlife corridor.

In its proposal to Council, the applicant ADW Johnson for owner Bitova Pty Ltd, said the development would include a wide range of diverse and interesting open spaces and parks to create a distinctive character for the locality.

It also includes a new small community playing field behind the existing café, to supplement other community assets and contributing to the development of the community hub and neighbourhood centre at Warnervale Railway Station.

Scattered local pocket parks will be only a 400m walk away for all residents and there will be bicycle and pedestrian paths to connect all the open spaces throughout the housing estate.

The flood plain and endangered ecological community areas take up a significant portion and although much of this area won’t be publicly accessible, it will be visually prominent and the developer says this will lead to a new residential area with a focus on the natural environment.

The proposal was on public exhibition during May and June, with only one community member responding with two concerns: the reduction of open space, and filling of land within the Porter Creek Flood Plain.

Transport for NSW requested a traffic study of the broader Warnervale area as well as the North Wyong Enterprise and Industrial Area to assess the impact of the development.

Minister was unable to institute a judicial inquiry