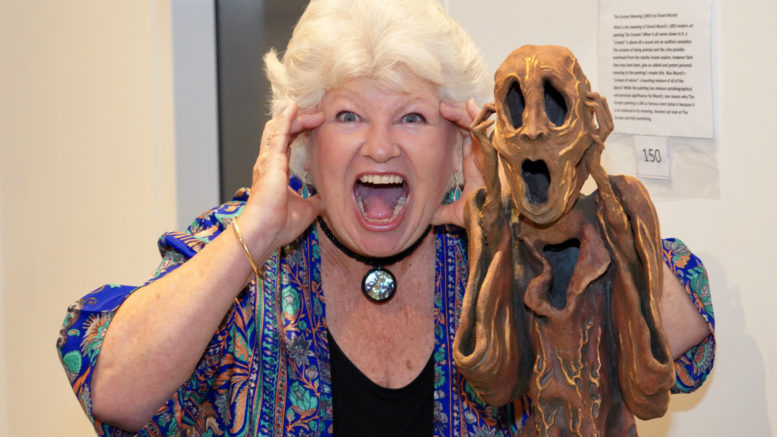 Sharon Ridsdale has changed the face of Fab Fakes with her take on ‘The Scream’ Inset: Laurence McIntyre with his top-notch forgery

Retro replicas, captivating copies and scintillating shams were all on show when the 2020 Fab Fakes exhibition was unveiled in Wyong last week.

Originally started to teach aspiring artists the principles of artmaking, Tuggerah Lakes Art Society (TLAS) has been running Fab Fakes since 1998, and over the years, the annual exhibition has evolved into one of the North’s most beloved art events.

A contest with a twist, Fab Fakes sees artists challenged to reproduce a work from the Old Masters, with the only proviso being that the artist being emulated must have been dead for at least 70 years.

This year’s winners were announced at the Fab Fakes opening night at the Art House on October 16.

Runner Up was Nerissa Jacoby with her take on Vincent van Gogh’s ‘A Starry Night’.

Corrine Adams rounded out 2020’s major award winners with the Pam Brooks Award for her version of Alfred Barber’s ‘A Rabbit Famile’.

This year’s Highly Commended awards went to Dannie Liu, Steven Beckett, Claudine Philp and Sharon Ridsdale, who put a twist on top of a twist, when she entered a sculptural rendition of Edward Munch’s ‘The Scream,’ a first in Fab Fakes’ history.

It was third times the charm for McIntyre, who said he was honoured to be this year’s best faker.

“I am very pleased to have won.

“To be chosen out of all the quality entries is quite the compliment.”

Speaking on the inspiration behind his counterfeit, the Point Clare resident said his piece was a homage to Elioth Gruner.

“Gruner actually won the 1919 Wynne Prize with Spring Frost and it’s a painting that I have admired for many years.

“The subtle way he captured the morning light is an incredibly difficult thing to do and his contemporaries often remarked that Gruner could paint light itself, so it felt like a good challenge to set for myself,” McIntyre said.

Having both attended Sydney’s prestigious Julian Ashton Art School, McIntyre said the choice was also a nod to their alma mater.

When asked about the meaning behind Fab Fakes, McIntyre said it rang just as true today as it did in 1998.

“Emulating someone who does it better has been the standard approach to teaching the technicalities of painting for as long as people have been picking up brushes.”

“You really do gain a greater understanding and appreciation of the skills used to create a piece when you recreate it, so by all means hone your skills by copying the masters.

“They aren’t called the Old Masters for nothing.”

A long time fan of Fab Fakes but first time entrant, the 3D artist said she entered her sculptural piece after learning that this year’s exhibition had fewer entries than previous instalments due to the pandemic.

The piece has since become one of the most talked about in this year’s offering and opened the door for more diverse artists to try their hand at a fabulous forgery in next year’s exhibition.

“I can’t paint to save my life, so I wasn’t expecting the piece to be accepted when I offered, but it was a pleasant surprise to be the first sculptural piece featured in 22 years of exhibitions.

“It’s caused a bit of controversy, but TLAS have said there’s no rules against it.

“It’s merely an assumption that it’s just for paintings and I’ve been told this is the first time someone has offered something other than a painting,” Ridsdale said.

With an overwhelmingly positive reaction to her work, Ridsdale is now excited to see what other mediums might feature in future Fab Fakes, but she concedes such drastic reimaginings can be tough to pull off.

“Creating a 3D representation of a 2D work is actually quite difficult, so I’m quite interested to see what other artists might choose to copy and how their interpretation of the original will translate.

“Hopefully this is a portent of things to come, but I don’t envy the curator,”

Fab Fakes is open at The Art House from 10am to 4pm on weekdays and runs until October 29.