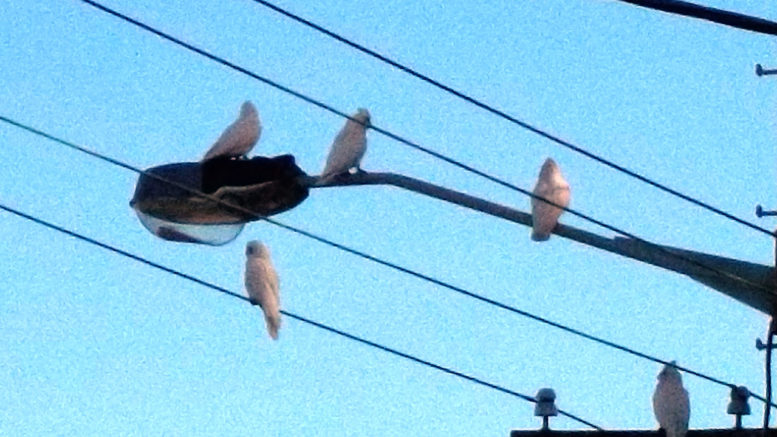 One observant Point Frederick local has caught a cackle of Cockatoos red-handed as they waged war on a set of streetlights.

Last week resident, Terry (who preferred not to give his last name), was alerted by his wife that several streetlight casings had been unclipped by cockatoos and left hanging between Albany St and Gosford Swimming Pool.

Terry posted a photo on Facebook seeking answers from the public on this strange bird behaviour.

“Overnight, some people came and put the covers back on, but the next morning the cockatoos were on the streetlights again,” Terry said.

“I was really unsure about why these birds did this, which is why I put it up online.

“The day I posted it on Facebook, people started commented explaining how the same thing had happened in their region, and how they had been trying to get their streetlights fixed for months.”

Ausgrid is responsible for streetlight maintenance around the Central Coast and said this is not the first time they have seen this type of behaviour.

“We occasionally experience minor damage to streetlight covers as a result of curious cockatoos perching or hanging from the light cover,” an Ausgrid Spokesperson said.

“In cases where birds or wildlife have damaged light covers, and it is reported to Ausgrid, we will send a crew to clip the covers back in place safely.

“The birds do not generally damage the light, just the clip that holds the cover in place.”

Spokesperson for the Central Coast Bird Group, Allan Bensen, said that there is no simple answer to the strange behaviour.

“I am not sure why that is happening; it could possibly have something to do with searching for insects for food or simply being mischievous,” Bensen said.

“Cockatoos are very clever birds, and they can use both their feet and their beak to manipulate things very well.

“They can be quite destructive in the fact that they will eat windows and door frames … I have even seen cockatoos open up wheely bins.”