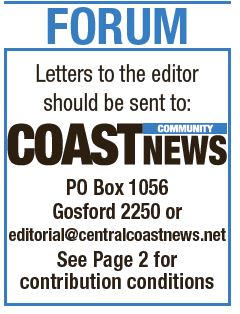 Forgive my fury, but the impotence of Central Coast Council and its planning system, as well as the arrogance of the applicant for a puppy farm in Palm Grove now floweth over. (Coast Chronicle, p8, Oct 7)

Most of us agree that we should live and let live, but there comes a point where the profits from an ethically questionable business shouldn’t drag on distressing the locals, let alone wreck their neighbours’ lives.

I don’t personally suffer the distress of listening to dogs barking, bitches crying for their pups, yelping, whimpering from cages, yaps reverberating across Ourimbah Valley because we live a kilometre away.

Nonetheless, I’m disgusted by the unfolding nightmare that the development application (DA) for 604 Ourimbah Creek Rd has become.

The applicants took months to actually apply, after transporting their existing business (breeding bitches, cages, remember?) from their former puppy farm to this bush valley.

After neighbours alerted Council, then complained over the incessant barking, Council told the applicants to cease business in October last year.

Think on that a moment – cease business – we are talking living creatures here, that don’t just switch off.

So, I guess “ceasing operations” was practically impossible.

The dogs’ noises (reflect on all they’re doing is communicating) form a “nuisance” of the type that the planning system is allowed to consider when assessing applications.

My fury at thinking of distressed dogs, what happens to deformed pups and worn out bitches and so on, is not a “nuisance” that the system is allowed to consider.

So, when assessing the application on October 1, the Local Planning Panel requested additional acoustic reporting because the applicant omitted to supply adequate reporting with their application.

With dog numbers at the farm seemingly drastically reduced in the lead up to October 1, it beggars belief that noise level readings and types, acoustics and so on will reflect the truth now.

As a dog owner and former farmer, I ask how can anyone control animals’ noises 24/7, 52 weeks a year without that control impinging on the life of the animal?

How does one really reduce or mitigate noise from living breathing dogs?

To purport that it is humanely possible is a fallacy.

Even if some noise management system is imposed as a condition, how do we trust that recalcitrant applicants, who have thumbed their noses at Council through this 16-month nightmare, will adhere to it 24/7, over a long weekend, in a heatwave, storm, bushfire, when demand for pups is extra strong; for example, pre-Christmas making extra dogs more profitable?

All the time, quiet or noisy, while this ethically questionable trade in dogs ensues, I drive by 604 Ourimbah Creek Rd and worry about the bitches’ welfare and the lives of designer pups who grow into unhealthy vet-bill-prone dogs becoming the unwanted ones found abandoned.

I don’t know if noise distress on neighbours or animal welfare worries me most, but I do know that my opinion is typical of the valley, that this business runs counter to our shared values, so I hope the Planning Panel will take that into their assessment, uphold decency and refuse it.

A bad example will be set if it is approved with lip service conditions, signalling that we can all flout planning law to make a profit.

A Budget of missed opportunity

The swamp needs to be drained

Why was this drivel published?