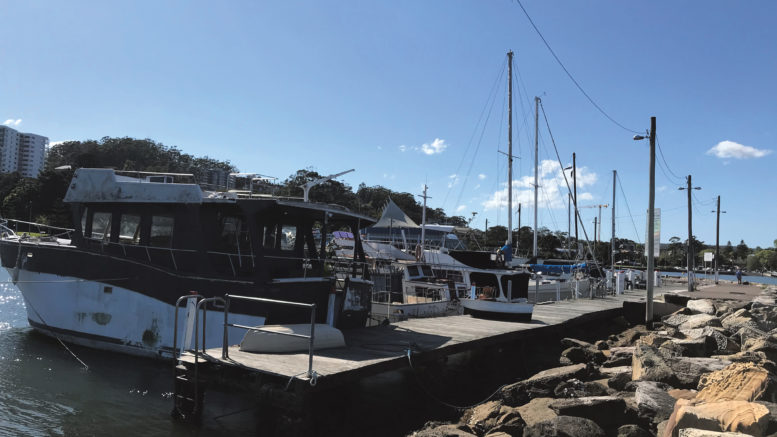 Boat owner Hernan Rotto of Tascott is calling on Central Coast Council to look into boats which he says are illegally moored long term at visitor berths on the Brisbane Water at Gosford.

“It is a pathetic situation where wharf berths have been taken over by selfish people who are not being removed by the Council,” Rotto said.

“I have been trying to get a visitor berth since May.

“I have photos from June and September 2020 showing the same boats on the same berths.

“I ended up asking the Mayor for a date to get a berth and if boat owners have been paying fees.

“I have not received answers for either question.”

Rotto said he has seen boats at the same berths for more than four months, some of them being unseaworthy.

“Also, the daily fee goes to Marine Rescue so if no one is paying, the boating community suffers,” he said.

“The Council can issue infringement notices,” he said.

“We rate payers appear to be paying for … the overstay of these selfish individuals.

“It is frustrating for people who are prepared to do the right thing and wanting to use a facility owned by the rate payers.”

Rotto said many private boat owners were unhappy with the situation and Council should be accountable for a public asset being “hijacked” by a selfish few.

An initial request to Council for comment led to a referral to Marine Rescue Central Coast, which Council said was responsible for boat moorings.

But Unit Commander Duncan Coles said while Marine Rescue had been delegated by Council to manage fees and bookings, it had no power to police illegal moorings.

“We are a volunteer organisation which relies on donations for support,” Coles said.

“Our job is saving lives on the water.

“Council has allowed us to collect mooring fees and keep a substantial part of them but rules relating to who can be there and how long they can be there can only be enforced by Council.

“There are signs at the wharf explaining the rules.”

Coles said some people paid mooring fees and others didn’t, with Marine Rescue helpless to force the issue.

“Some have been there for a very long time; some pay, some don’t,” he said.

“Council is aware of this and has done very little to help.

“It’s a complicated jurisdiction – police won’t become involved because it is a civil matter and the RMS can’t do anything because the wharves are Council property.

“The only authority which can police the matter is Central Coast Council.”

A request for further comment from Council had gone unanswered at the time of going to press.