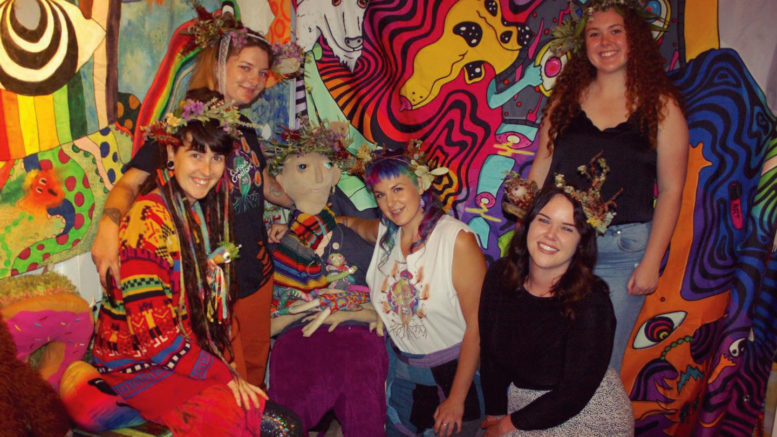 From hula hooping classes to penis making, if you’ve been to The Entrance Gallery at all this October, you’ll have noticed something’s a little different.

Since the start of the month, the gallery has been home to The NadRad, an art experience unlike anything the Coast’s seen before.

Spearheaded by local artist collective and NFP, The Crud Muffins Inc., with support from guest artists, Central Coast Council and Gosford Regional Gallery, The NadRad has delivered a range of whimsical and skill-diverse workshops after transforming the gallery into a vibrant, new world exhibition.

Natika Newing-Stern is a founding member of The Crud Muffins, the collective’s Public Relations Officer, and is the self appointed high priestess of silly scribbles.

She said the goal of NadRad was to get people excited about art again.

“The NadRad actually started from all us of making art together.

“It’s the name we’ve given the world we’ve created that reflects the positivity and joy we all feel when making art.

“We want as many people as possible to experience The NadRad and be inspired to be creative.

“You don’t need any experience or to have gone to a fancy art school.

“Art is for everyone after all.”

And it seems The Crud Muffin’s quirky offering is having the desired effect, with their out of the box program helping attract first time gallery goers and workshoppers in droves.

Whether it’s because they’ve successfully unshackled fine arts from the general public’s often hoity-toity perceptions or because locals just want to make a dick out of felt (the first Phallus Palace workshop was so successful that they had to hold more), one thing’s for sure, there’s an audience willing to go down the rabbit hole in search of The NadRad.

“We had 150 people come in over the opening weekend and since then, interest has only grown.

“Yes, some of what we do is a little bit silly, but I think that’s part of the reason why our takeover program has been so popular.

“People know they don’t have to be an artist to enjoy and participate in what we do, and I think that’s really resonating,” Newing-Stern said.

And with more fun stuff like Bob Ross style water painting and Blokes in the Buff life drawing on offer up until the 25th, there’s still plenty for curious locals to discover.

For The Crud Muffins, the takeover is also a big step towards their goal of establishing a fully fledged NadRad creative hub somewhere on the Coast.

“We came into this after running The NadRad at music festivals, so this was very much a dress rehearsal of sorts for us to see what does and doesn’t work in a fixed space.

“We have loved this opportunity and believe that The NadRad is just the thing that the Coast needs to support creative play and collaboration,” Newing-Stern said.

For the full The NadRad program visit The Crud Muffins Facebook page or simply pop into the gallery to learn more.