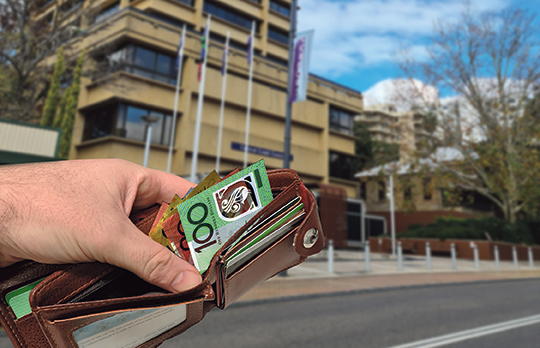 A vote of no confidence in the CEO Gary Murphy failed to get the numbers at Central Coast Council’s meeting on October 12.

The six-hour meeting concentrated on the financial woes of Council, which had been made public on Tuesday, October 6.

All other items were deferred to an extraordinary meeting called for Monday, October 19, and Council spent the six hours debating how to attack the financial situation that it found itself in.

As part of that, Cr Greg Best put forward a notice of no confidence in the CEO, which included that the CEO’s powers of delegation, other than those required to carry out basic operational activities, be withdrawn until further notice.

The Mayor, Lisa Matthews, agreed to add it as an addendum to her Mayoral Minute about forming a finance committee, although she had concerns about the removal of the CEO’s delegation powers and what impact that would have on Council operations.

Council went into confidential mode, behind closed doors for more than an hour, to discuss the issue and gain advice from Council’s legal officers.

Eventually, they came back out of the confidential session and continued to debate the issue for another hour and a half.

Cr Chris Burke opposed the move against the CEO.

“It’s only in the past 12 months that we’ve had fires, floods, natural disasters and a pandemic, and we’ve been praising the CEO and the ELT and now we’ve lost confidence in them?” he said.

Cr Kyle MacGregor said moving a vote of no confidence in the CEO had no real standing other than leaving Council liable to damages.

He reminded councillors of the legal advice that they had just received in their confidential session.

“One could be led to believe this has been a catastrophic failure of governance and financial controls by the operational wing of Council … but if you are genuinely interested in prosecuting the case for some of these ideas, make sure they are done through the correct mechanism,” Cr MacGregor said.

However, Cr Best said: “There has been a significant erosion in confidence in the elected body of this Council”.

“So therefore, I think that it is only fair and reasonable that we should reflect a similar lack of confidence in those that administer the operational business of this organisation.

“Honestly councillors, the buck stops here, we have to take responsibility ultimately, but the staff in the operational sense should equally take the responsibility,” Cr Best said.

After much to-ing and fro-ing, the move of no confidence against the CEO and withdrawal of his delegation powers, was removed from the Motion.

What eventually was passed was a three-point Motion.

Point one acknowledged the distress of the community, including the impact of community confidence in Council.

Point two noted the forensic internal audit of Council’s finances underway, including the establishment of a working group to implement a 100-day action plan to recovery.

Point three said Council would establish a finance committee comprised of all councillors, an independent financial expert and human resources adviser appointed by the Office of Local Government, and an independent legal adviser to oversee Council’s forensic internal audit and 100-day Action Plan to recovery.

The CEO was not at the council meeting and no explanation was given for his absence.

A later press release said he was on leave.

Questions for an eventual Inquiry