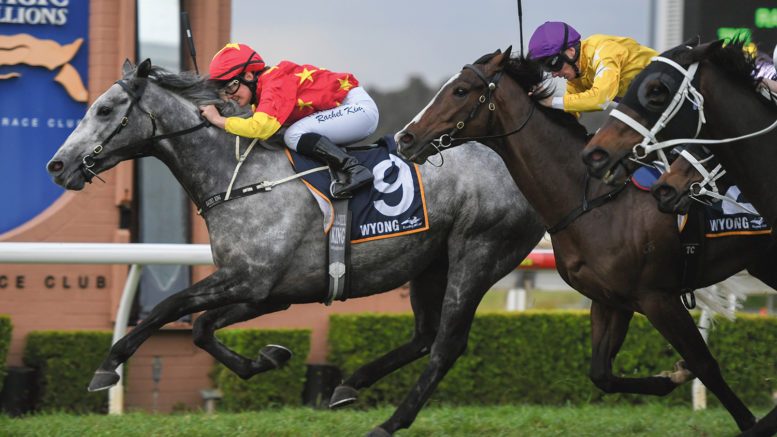 A little bit of history was made at Wyong Race Club over the weekend, with Rachel King becoming the first ever female jockey to claim the Wyong Cup in the 122nd running of the prestigious race.

The talented rider made a clean sweep of both feature races as part of the 2020 Carlton Draught Wyong Gold Cup Day Program, taking out $160,000 on the Richard and Michael Freedman trained Paths Of Glory and the $140,000 prize in the Listed Bishop Collins Accountants Mona Lisa Stakes, riding Asiago for Godolphin.

It was her ride on Paths Of Glory that caught the eye however.

After being posted toward the rear, she weaved her way through the field bursting through late to win by a long neck.

The patient ride earned the praise of co-trainer, Richard Freedman.

“It was a brilliant ride by Rachel.

“I said to her ‘you’ll have to give this horse a rest somewhere, because he’s first up over the 2,100m.’

“She might have taken that a bit literally – he was resting away at the back where he’s never raced.

King said she had considered Asiago a good chance in the Mona Lisa but had been surprised to take out the Cup.

“I was shuffled back to nearly last and probably gave Richard a heart attack.

“[Then] he dropped the bit at the 800m, and I thought he’d just keep whacking away, but once he started to improve, he really switched on and started to travel.

“Near the end I got a good tow into it and he hit the line strong.

“He’s a dynamic type of horse and I feel like he could gallop all day,” King said.

Wyong trainer, Damien Lane, also had a memorable Cup Day, taking a double for his second year in a row.

Both winners, Just Field and Bombasay, were having their first starts for the stable.

Lane is excited about the prospects of the pair, considering they could both go on to win better races.

“The two of them are both quality horses and I think they’ve both got a bit of a future,” Lane said.

Just Field upset her rivals to bring up her first victory for Lane in the Central Coast Coolrooms’ Class 1 over 1,100m while Bombasay took out The Doylo Springtime Conditional Benchmark 68 over 1,100m.