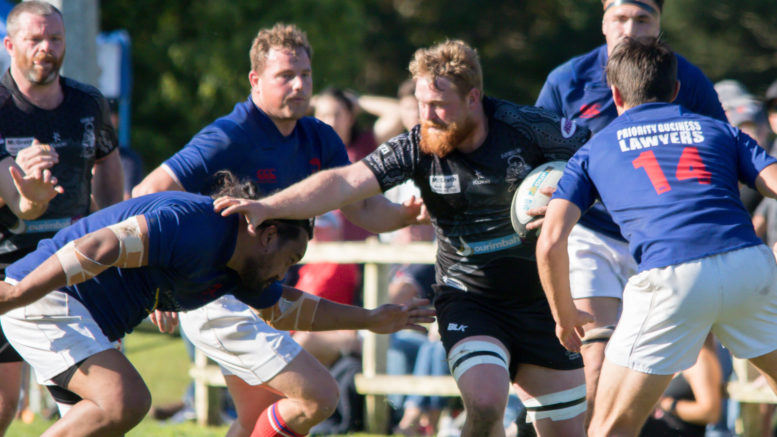 Final five placings remain up for grabs with one round of the Central Coast Rugby Union (CCRU) competition remaining.

In a close tussle at Ourimbah Rugby Park, the Terrigal Trojans hit back after last week’s loss to Hornsby to defeat the Razorbacks 26 points to 20.

Neither side was able to get too far ahead during the match.

Terrigal scored first but Ourimbah replied quickly with a penalty goal and a converted try of their own to lead by 10 points to 5 mid-way through the first half.

Terrigal then scored again to lead at half-time, before Ourimbah retook the lead again with a penalty goal.

But two quick tries to Terrigal in the second half proved to be enough, despite a late surge by Ourimbah.

The win sees Terrigal regain top spot on the ladder with 30 points, two points clear of Ourimbah on 28.

The Trojans will now play Avoca Beach who also posted a win last weekend (see below) to move to 23 points on the ladder and who will be keen to improve their position in the top five.

Ourimbah, on the other hand, will play their last round match against the hapless Kariong and are expected to pick up the competition points and put more heat on Terrigal.

Over at the Lion’s den (Woy Woy Oval), the local side produced the upset of the season, defeating Hornsby 27 points to 25.

In a gripping encounter the scores see sawed throughout the match but it was Woy Woy, in their final match of the season and trailing 22-25 in the final minutes, who lifted to cross for a match winning try.

Half Zac Stride, Centre Brandon Edwards, prop Viepueki Siale and lock Tyren Andrea were all outstanding for the Lions, while Hornsby’s No.8 Tevita Puikala and centre Tui Hakavalu Ika, who crossed for two individual tries, also had strong games.

The Lakes cemented their position in the Finals with a comfortable win over Warnervale at Woongarrah Oval by 47 points to 22.

The Lakes skipped out to a 21-0 lead early in the match and were never really troubled after that, with fullback Macui Rauluni, centre Laufisa Vaisagote and flanker Va Talevia all having strong games.

The Lakes take over from Hornsby in 3rd place on the ladder on 26 points (Hornsby 24) so their clash with each other in the final round this weekend promises to be a beauty.

Avoca Beach showed great form when they easily accounted for Kariong at Kariong Oval by 76 points to nil.

It was one-way traffic for the Sharks for the entire 80 minutes with a very notable performance from winger Alex Halls, who scored 3 individual tries.