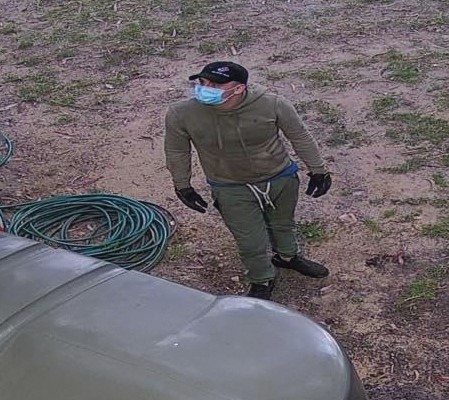 The hunt is on to identify a man who allegedly stole and burnt a firefighting vehicle and valuable equipment from the NSW Rural Fire Service’s Central Coast Fire Control Centre at Charmhaven.

The theft occurred at around 3am on Tuesday, September 15, with the van found well alight around 2km away later that morning.

Police are investigating, but Charmhaven Tennis Centre may have made their job easier, with the centre’s security system capturing footage of a suspicious character possibly linked to the incident.

Centre Manager, Brett Bevan, said the centre’s CCTV cameras show the man driving into the centre carpark in the stolen RFS vehicle before attempting to break into the centre.

“The footage clearly shows the man arrive in the stolen vehicle, exit it, and attempt to break into the centre by throwing rocks at the windows and by trying to force open a door.

Bevan has since passed the footage onto Tuggerah Lakes Police and the RFS in the hopes it will aid their investigation.

The centre is also offering a $500 reward for anyone who can help identify the man in question.

“While we are disgusted that this person has damaged our new building our primary concern is for our champion local RFS crew who had to put out the fire in their own vehicle.

Anyone with information about this incident is urged to contact Crime Stoppers on 1800 333 000.