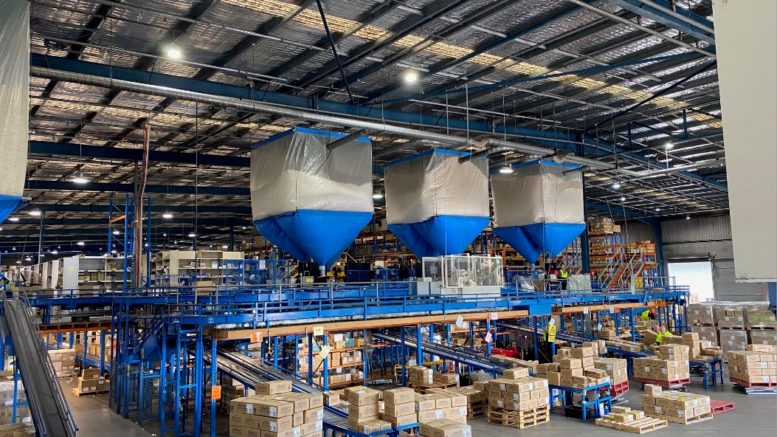 Inside the Allied Distribution Services warehouse at Tuggerah which will undergo a $2.5M upgrade

Hachette Australia is investing $2.5M in a major infrastructure upgrade at the Alliance Distribution Services warehouse hub in Tuggerah, to secure jobs and meet a surge in book sales.

The three-warehouse hub at Tuggerah is the only ADS centre in the country and houses 7.5 million books and about 52,000 titles for distribution into the Australian and New Zealand markets.

Since ADS opened in 1999, a second warehouse was added in 2010, as well as implementation of automated picking processes, and a third $700,000 building for bulk storage was completed in 2019.

Distribution Director, Phill Knight, says, this additional $2.5M upgrade will be in the original warehouse where all the activity takes place, such as picking and packing lines, despatch and offices.

“This is the most significant investment in the past eight years and we are expecting to increase productivity and service by about 30 percent.

Knight said phase one of the work to the forward picking line system will be completed by mid-October and phase two is scheduled for implementation by next April.

“We ship about 17 million books to customers per year and I think we will exceed that this year,” he said.

“We’ve already seen a massive spike in the number of lines and volumes processed daily as booksellers are submitting orders at pre-Christmas levels.

“Business has been strong for the past year or two and particularly in the two or three months leading up to Christmas, but this year, COVID-19 has seen a real resurgence in people reading books, so we’ve been incredibly busy since June.

“Our key message to the industry, and to the local community, is that we’re investing for the future so we’re actually securing jobs for the longer term.

“Right now, we have more than 70 permanent employees, but because we’re so busy, we probably have about 60 temp staff on site as well, which we’ve recruited through a couple of local temporary staff agencies,” he said.

“The reason we have so many temps is because there’s a huge difference in activity from, say March, compared to pre-Christmas months, so we increase and decrease staff based on demand.

“We decided to put on a trainee as a responsible commitment to the future of local employment and we hope to continue our trainee program moving forward.

“This will mean we can provide valuable workplace experience in several areas such as credit control, customer service, logistics administration and various related warehouse functions.

“The $2.5M investment allows us to operate more efficiently as activity increases, we’ve really struggled the past couple of years during peak periods where we’ve had to work lots of extra hours, so this new infrastructure will allow us to be more efficient in what we’re doing.

“The additional capacity gives us the scope to potentially add other publishers to our stable of about seven publishers, which in turn would lead to additional employment.

“ADS would be one of the top three distribution companies in Australia for books and we’ve done all the Harry Potter book launches, just for an example, as well as big brand names such as Stephanie Meyer, Matthew Reilly, Peter FitzSimons and the Treehouse series.

“So it’s been a fun ride and a pretty high profile ride in the book industry,” Knight said.

The company also interacts with the community through annual sponsorship to Starlight Foundation’s Christmas appeal for disadvantaged and disabled children, as well as the Women’s and Children’s Refuge and several other local charities.