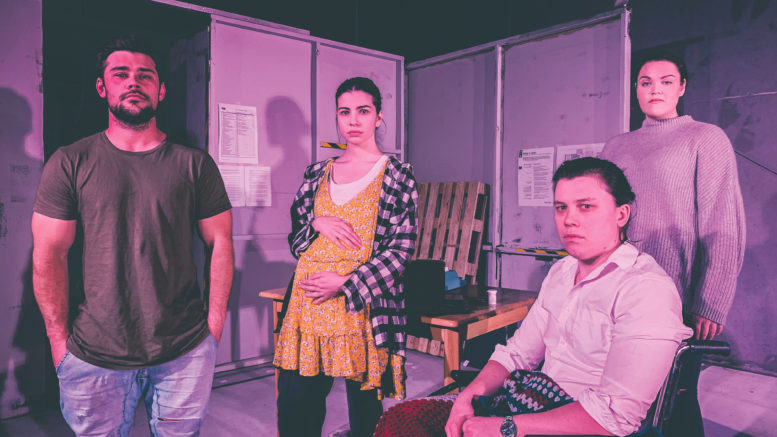 To survive an apocalypse, you need strength, speed, and survival skills, so what happens to people who don’t have any?

That’s the question Jopuka Productions is musing over in Bubble, the first show of its 2020 relaunch.

Written and directed by Declan Green, Bubble follows Sam, the once acclaimed author of a children’s book series.

Now confined to a wheelchair and isolated from what’s left of Australian society following an unnamed catastrophe, Sam depends entirely on his siblings, Casey and Violet, but as they drift apart the cracks in their relationship begin to show.

Ultimately a story about family, Bubble explores the limits of what the family bond can endure.

The sold-out production opened at Jopuka’s Tuggerah based performance space, The Launch Pad, on September 18, and was the first bit of live theatre to hit the Coast since lockdown.

It’s a milestone that Jopuka’s Founder and Artistic Director, Joshua Maxwell, is proud of, but it’s not been without its challenges.

“We had four shows over that opening weekend with 50 patrons who were all engaged and ready for live theatre, but that was still a 75 per cent reduction in audience numbers, in accord with current Covid guidelines,” Maxwell said.

Those guidelines have impacted every aspect of the production, and while the company is excited to be trailblazing, Maxwell admits it’s been tough to navigate what’s a fundamentally different world.

“Ironically, getting Bubble on track has been like dealing with a micro apocalypse.

“Under the regulations, theatre is fundamentally different.

“The logistics of running a Covid safe show are everchanging and we’ve had to do everything from restage the show and configure our performance space, to bringing in extra understudies to ensure that we can continue on in the event of a cast member needing to get tested.

“And that’s on top of all the cleaning and sanitising involved.

“In a theatre setting, these rules feel 10 times more intense.

And with that in mind, Maxwell said Jopuka’s triumphant return to the stage had been bittersweet, with the remainder of the relaunch program likely to face the same challenges moving forward.

“Coming back has been overwhelming in the sense that theatre in and of itself is so different.

“Going into this I knew it had changed, but theatre is just as much about the experience as it is the performance, and with that so fundamentally different, theatre has just inherently been altered in what it is and what it means,” Maxwell said.

Bur regardless of what’s been lost, Maxwell said Jopuka would be forging ahead with its vision for 2020 and focusing on what he’s hoping will be a much better 2021.

“Being closed for so long has had a massive financial impact on the company.

“We’ve lost $100,000 in revenue and that’s going to have an impact on our future programs, but the loss would be even greater if we stayed closed, so this is an educated risk.

“We’re at the point where we just have to accept that this is the way the world is right now and get on with it,” Maxwell said.

“Bubble has been uplifting for our company members, who had everything they knew and were looking forward to ripped away from them, and now all eyes will be on our remaining relaunch shows, Talullah Eden’s, Cockhead, and Dean Bryant’s, Gaybies, our 2021 program announcement and Jopuka’s upcoming fifth anniversary celebration,” Maxwell said.

Lighter side of theatre company politics