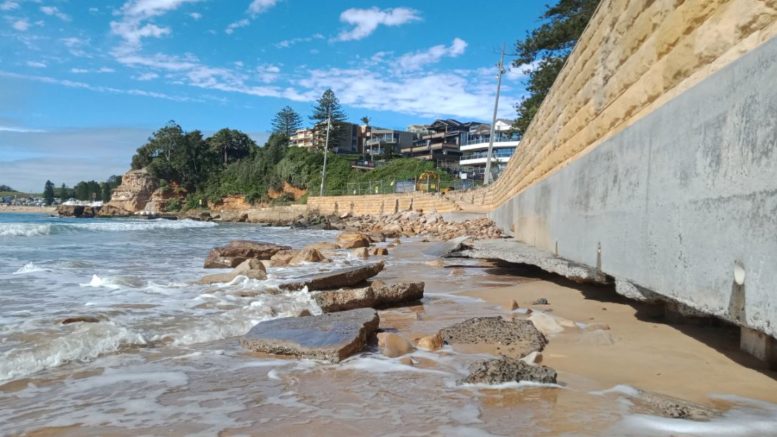 Brad Allen’s photo of the southern end of Terrigal Beach

I understand that government has a duty to stabilise the Wamberal escarpment, but anything beyond that is the equivalent of the not uncommon “privatise the profits, socialise the losses” attitude of some stakeholders.

I would also argue that this public money may be needed in the coming decade for assisting with the “planned retreat” recommended by the Wamberal Beach Management Options: Cost Benefit and Distribution Analysis Report of 2017.

I would further argue that public money is required for the clear and present need at Terrigal public esplanade.

Anecdotally, the extent of the current deep erosion has never been seen by locals.

The attached photographs were taken at the lunchtime low tide of July 29.

There is a clear and present need for this public infrastructure, used by the public in their thousands, that may have been impacted by the regular removal of the Terrigal lagoon berm creating an undersea delta.

During the next low tide, I would urge Central Coast Council to divert their large rock manipulator machinery which is nearby at Terrigal lagoon.

The broken debris, currently exposed, could be shaped into a very interim riprap line in front of the esplanade.

It will not be perfect, but progress, not perfection, is all that is available with Dame Mother Nature.