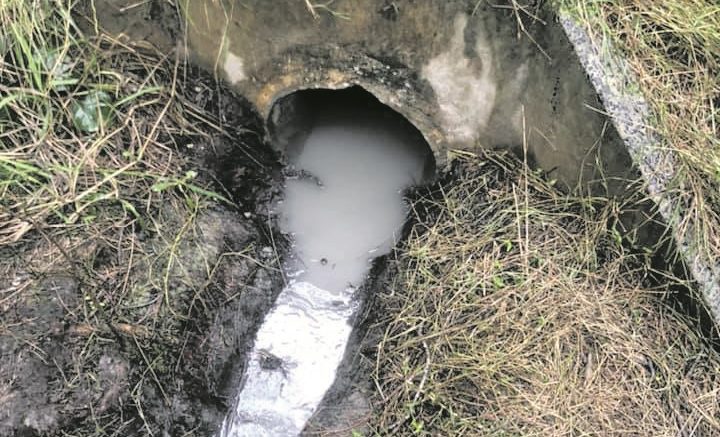 Community concerns are escalating over concrete waste which residents say continues to pour into Kincumber Creek via a stormwater outlet from the Hymix batching plant in Cochrane St.

Environmental activist Cori Hopper has been cataloguing incidents over several years and says the ongoing problem is destroying the creek.

He has established the Daily Urban Punish Facebook page, on which he provides regular updates.

“I feel like I have been banging my head against a brick wall for years to get some action taken over this situation,” Hopper said.

“I first moved to Kincumber in 2014 and soon noticed a grey sludge moving through the creek every time it rained.

“It’s been happening more and more frequently in recent years and I have written hundreds of emails to Council, to the EPA and to other government authorities to try to get something done.”

The problem, Hopper said, is that the plant’s catchment system overflows every time it rains, sending waste through a stormwater drain which feeds directly into the creek.

“It doesn’t even have to be a heavy downpour – I have seen the sludge coming out of that stormwater drain even after light rain,” he said.

“The stormwater outlet is hidden among the mangroves pretty much opposite the plant and many of the mangroves have died off due to the contamination.

“It is impacting not just the water quality, but the wildlife in and around the creek. “We used to see schools of garfish and the occasional bream but now all we see are fewer and fewer eels – and I have seen even them gasping for breath.”

Hopper said the EPA finally conducted an inspection in June, after which Hymix cleared out the stormwater drain with a huge pumper truck.

“But since then it seems to have become worse, with the grey sludge positively streaming out of the drain,” he said.

In a statement issued on August 20, Hymix confirmed that it owns and operates the concrete batching plant at 15- 17 Cochrane St.

“There have been allegations of pollution in relation to air and water, all of which have been documented by the EPA,” the statement says, “In response to these complaints, Hymix is undertaking an independent environmental audit assessment of the premises to demonstrate compliance.

“This environmental audit is being undertaken in consultation with the EPA.”

The NSW Environment Protection Authority (EPA)says it has conducted several inspections of the plant and is working with Hymix to improve operational standards to help prevent potential stormwater pollution.

“The EPA has obtained samples of water discharge from the Hymix plant and provided all results to the company to assist in its operations,” a spokesperson said.

“Those results showed pH levels of waters in onsite pits were within the correct range, however the pH level in stormwater discharge outside the plant was elevated.

“Hymix has an obligation to comply with legislative requirements with regard to dust, noise, waste and discharge of polluted water.”

“Obviously the EPA has many things to monitor but I have been asking them to do something for years,” he said.

“This is a large level contamination event and until that stormwater drain is blocked off it will continue.

“They are not doing nearly enough to protect our waterways.”