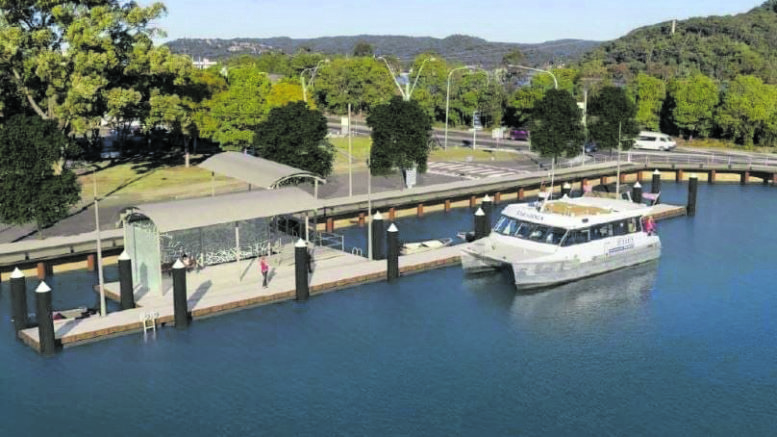 Boaties, shoppers, commuters and ferry operators all over the region are celebrating the beginning of major construction this week on the $5.6M Woy Woy Town Centre Wharf redevelopment.

The largest wharf project ever undertaken by Central Coast Council has been a long time coming, with plans first mooted in 2009.

Cr Chris Holstein, who joined Deputy Mayor Jane Smith, Parliamentary Secretary for the Central Coast, Adam Crouch, and Council staff for the official announcement of the beginning of construction on August 18, said the project had been “left lagging” for years.

“This is where the community gathers for festivals and events and the new wharf will be very welcome,” Holstein said.

“The current jetty becomes submerged during king tides, but the new pontoon wharf will rise with the tide to reduce disruption and improve disability access,” Crouch said.

“The wharf is used by hundreds, if not thousands, of people every day. “The new wharf will be capable of accommodating 35-metre vessels up to 250 tonnes, making it a significant asset to the Woy Woy community.

“This is just one of numerous wharf upgrades – including at Davistown, Empire Bay, Spencer and South Tacoma – that the NSW Government and Central Coast Council are delivering together.”

As well as a floating pontoon, the project will also deliver: a dedicated fishing area on the boardwalk; new seating benches including smart benches with mobile phone charging capability; banner poles; and landscaping.

Deputy Mayor Smith said the project was a great example of the partnership between the State Government and Council in delivering important infrastructure.

Council’s Director Roads Transport Drainage and Waste, Boris Bolgoff, said the existing Commercial Wharf had been modified to ensure ferry services could continue as scheduled throughout construction of the new wharf.

“The Commercial Wharf – which will operate as the main wharf amenity for the area as we build the new Woy Woy Town Centre Wharf – has undergone temporary modifications to ensure it is accessible for community members who use wheelchairs and other mobility aids,” Bolgoff said.

“It is very exciting to commence construction on this significant project which features a floating pontoon that will move with the varying tides and ensure access to ferry services and facilities in most tide and weather conditions.

“The new wharf will benefit commuters and community members who regularly use ferry services and will undoubtedly become a centrepiece and draw-card for Woy Woy Town Centre.

“Accessibility for community members who use wheelchairs or other mobility devices has been a priority throughout the design process, with one of the added key features of the project being infrastructure to accommodate a wheelchair lifting facility on the pontoon for recreational boat users.”

Council is working closely with ferry services and nearby businesses and stakeholders to minimise impact during construction. The project is set to be completed by the end of the 2020-21 financial year.