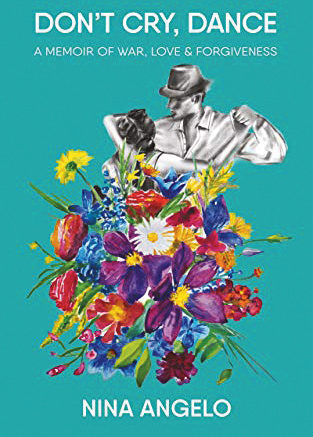 Nina Angelo is an OAM recipient for her Service to the Arts and the (NSW) Central Coast Community.

She is a well-known artist and storyteller and this book is a memoir that combine’s Nina’s life with the tapestry of experiences of her mother and father, both Holocaust survivors.

Nina’s work in textiles has led her on a journey throughout Australia as well as Fiji and Tuvalu where she has taught workshops, organised festivals, and owned a store.

She is a mother and grandmother and … she is the daughter of Janka and Albert Yacoël, who were both sent to Auschwitz, the notorious concentration camp, and who both survived.

This is their story as well as her own.

Janka was born in Poland.

Her father, a doctor, went off to fight in the army when the war started.

Janka walked him to the bus stop as her mother “couldn’t face it. (She said she knew she was not going to see him again, and she didn’t).”

Janka and her family survived many years under occupation – she went to school and worked at various jobs, but she was eventually apprehended by the Gestapo and sent to Auschwitz.

Albert’s family came from Spain but were cast out during the Spanish Inquisition to settle in Greece.

He was working for the resistance when he was given up by a German spy who had infiltrated the group.

He too was sent to Auschwitz.

While Janka’s and Alberts paths crossed at Auschwitz, it was in Paris, after the war, that they met again.

Janka and her friend have been given a ten-pound note and while her friend wanted to spend the money on getting some basics, Janka fell in love with a teal blue dress, “Look, we never had anything ten minutes ago and we might not have anything in ten minutes time, but we’ve got our life and I really want that dress!”.

Albert sees Janka wearing that dress and they begin the rest of their lives together.

They live in Greece for a while, where Nina is born, but eventually settled in Australia, arriving in 1949.

Years later Nina is struggling with being a single mother, raising twins while trying to earn a living.

She has experienced two house fires (that’s right, not one but two), which destroyed everything, including all the notes and tapes that Janka recorded about her life.

But Nina is spiritual and, when she is down, the universe supplies and years later she discovers a wooden trunk that has been in her possession.

Among the items in the trunk are Janka’s notes.

Another miracle happens when a friend tells Nina there is a web site that contains an interview Albert had given in 1986 for the Sydney Jewish Museum – seven hours of interviews.

What an amazing thing to find 16 years after her father’s passing.

I am not normally a fan of audiobooks, however Don’t Cry, Dance is available as an audiobook and, in this case, I think the story about Albert and Janka would make for great listening.

The characters’ accents are evident in the writing but to actually hear their words, spoken would be powerful.

I did have one issue with Nina’s story – I found it jumped around a bit, almost as a stream of consciousness rather than a cohesive memoir – but the story is powerful and the message of love, family (be it related or of the heart) and forgiveness is a powerful legacy and one we can all learn from.

The audiobook version is narrated by the author and is recorded and produced by local composer Yantra de Vilder.

Further details about Nina Angelo can be found at here website: ninaangleo.com.au