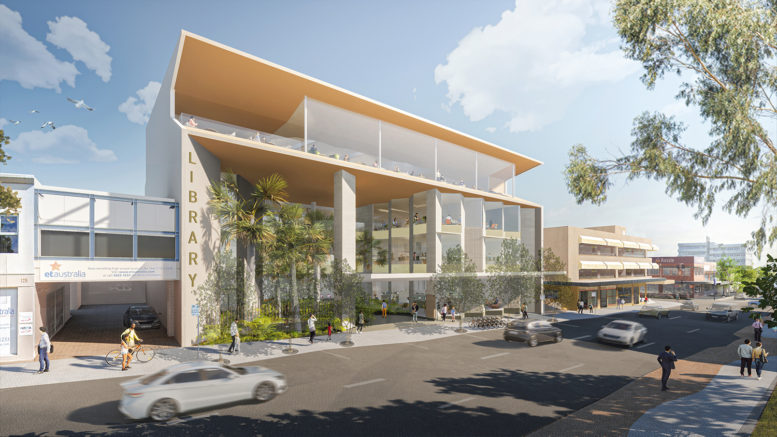 An artist’s impression of the new regional library

It’s full steam ahead on a regional library for the Gosford CBD, with designs almost complete and a development application to be lodged with the NSW Department of Planning within days.

Councillors voted at their August 24 meeting to direct the CEO to proceed with a DA and call for tenders for the demolition of the Parkside building at 123A Donnison, where the new building will be erected.

“With connectivity to the surrounding iconic views of Presidents Hill, Rumbalara and Kibble Park, Gosford Regional Library will create a civic presence in the heart of Gosford and will act as a destination space that people are drawn to,” Cr Matthews said.

“Libraries are at the heart of creating liveable, connected and sustainable cities and that is what we want to see for the Gosford CBD.”

The library is on track for completion by 2023, but the decision to progress the project was preceded by some spirited debate.

An amendment put by Deputy Mayor Jane Smith which called for a workshop to be held in coming weeks to bring councillors up to speed on latest design concepts was defeated, amid fears it could delay the process.

Councillor Jillian Hogan said it was important to deliver to the community something for which they had paid levies for some time.

But Councillor Kyle MacGregor was concerned at the number of facilities included in the building and asked if it was intended to be “a council administration building by stealth with a couple of floors of books”.

“Residents didn’t pay for a new council building, this is not fit for purpose,” he said.

“How is the function centre going to compete with the Gosford RSL and other buildings coming in the CBD that we know about?”

Although the building will have the facility to hold Council meetings, Cr Smith reiterated it was primarily a library.

She said a recent decision to hold Council meetings only at the Wyong chambers was disadvantaging many southern residents who found it difficult to attend and that holding meetings at the new library building would be a good alternative.

Councillor Richard Mehrtens said the project had been stalled for years and it was time to move forward.

“Books are not necessarily the only reason to have a library anymore – they are also about having mixed space,” he said.

CEO Gary Murphy pointed out that a timetable needed to be adhered to so that $7M in Federal funding pledged for the project would not be lost.

Despite concerns raised about the possible escalation of costs during the life of the project, Murphy said he was confident the budgeted amount of $27.2M was realistic for construction and fit-out.

The motion was eventually passed, with only Councillors MacGregor, Greg Best and Doug Vincent dissenting.