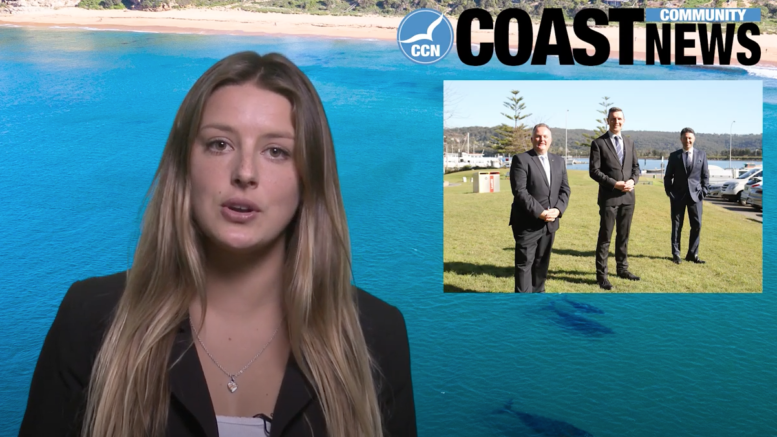 Hi, I’m Jacinta Counihan, and hopefully we’ll be seeing a little more action like that, with FIFA announcing last week that Australia and New Zealand will be hosting the 2023 FIFA Women’s World Cup – the first ever to be held in the Asia-Pacific region.

Mayor, Lisa Matthews, and fellow councillors have jumped on the front foot to promote the Central Coast as a host for some of the events and even, an international team.
We spoke to the Mayor, earlier today.

Green Point Christian Collage has been forced to shut this morning after fears a teenage boy may have contracted COVID-19.
The closure was issued by NSW Health with all students and teachers being urged to stay at home as a precaution.
School officials are waiting for the test results to come out this evening.

Well, residents wanting to lodge a DA with Council can now do so from the comfort of their own home, with an official launch on July the first of the State Government’s new ePlanning initiative.
The Central Coast Council was one of the first to adopt the new system and, on Wednesday, NSW Minister for Customer Service, Victor Dominello, joined Terrigal MP, Adam Crouch, and Council CEO Gary Murphy, in Gosford for the announcement.

Thanks Jacinta, yes, Adam announced this week that the State will commit a total of $4 million to two social housing providers in a bid to tackle the growing problem of rough sleeping on the Central Coast.
The spending is part of the broader “Together Home” program and we spoke to Adam about that this week.

Turning to business and Club Wyong confirmed this week that is in amalgamation talks with the Mounties Group (a collection of seven community clubs in the Sydney area).
The two clubs have reportedly been negotiating a tie-up since March
Mounties CEO, Dale Hunt, said about five percent of our members live on the Central Coast and also that Club Wyong would retain its name.

And while we’re on the subject of clubs, Hardys Club in Killcare has launched a GoFundMe campaign to try and resurrect itself.
The Club was forced to close during the Covid-19 pandemic but after forming a new comitee has since launched an ambitious new business model to reinstate the liitle club as a great music and food venue

In other news, former Arts Ministers Don Harwin, who you might remember resigned his post in April following suggestions he breached COVID-19 restrictions by moving to his Pearl Beach home.
Well today, a court decision cleared Harwin of any wrong-doing and we understand Mr Harwin will be reinstated to his former position in the NSW cabinet.

And finally, Jacinta, dozens of locals flocked to headlands around the Central Coast last Sunday to witness the northern migration of some of the world’s largest sea animals.
This event is part of an annual whale census run by the volunteer-based group, ORRCA, which is aiming to map the growth in different species of whales.
By sunset on the first day, the total number of mammal sightings along the Coast had reached 1,679.
Back to you.
Thanks David, there’s lots of sport looming on the horizon, and finally, spectators will be allowed to attend Central Coast Stadium to watch the footy.
Let’s go to Ross Barry.

Thanks Jacinta, yes, 4,598 is the magic number – that’s the number of people allowed into Central Coast Stadium in accordance with the latest social distancing protocols for stadia.
And there’ll be plenty to see, starting with tomorrow night’s NRL match between the locally-based NZ Warriors and the Brisbane Broncos.
The Warriors are coming off a 50-6 drubbing by Melbourne last week and will be without captain Roger Tuivasa-Sheck who was suspended for a week for a shoulder charge.

And that game gets under way at 5:30pm
On Sunday July 12, the Stadium will also host the top of the table clash between the Newcastle Knights and the Parramatta Eels.
Football fans are also set for an explosion of blue of yellow when the Central Coast Mariners play three matches in 10 days at Central Coast Stadium, beginning with a clash against Perth Glory on Saturday July 18 kicking off at 5pm.
The Mariners will then host the Newcastle Jets on Friday July 24 and the Western Sydney Wanders on Monday July 27.

And finally, Jacinta, some great news for horseracing fans – members, owners and guests were allowed back on course this week for the first time since March and were treated to some fine racing.

Central Coast News Issue 249 was out this morning, hot off the press with a lead story of how the NSW National Parks and Wildlife Service is seeking to recruit 125 women for the frontline. You can read that story and many more in the paper, or on our website.

We will leave you today with some scenes from Fantastical Fairy Friday, with professional story-teller and fairy god-mother, Lindy Mitchell-Nielson, who will be conducting more fairy fun and frolicsome fair games with fabulous fairy craft in the garden right through the school holidays.

Thanks for joining us – we’ll see you next week.

Presented by Jacinta Counihan with Ross Barry and David Abrahams. Film and editing by Alex Herget