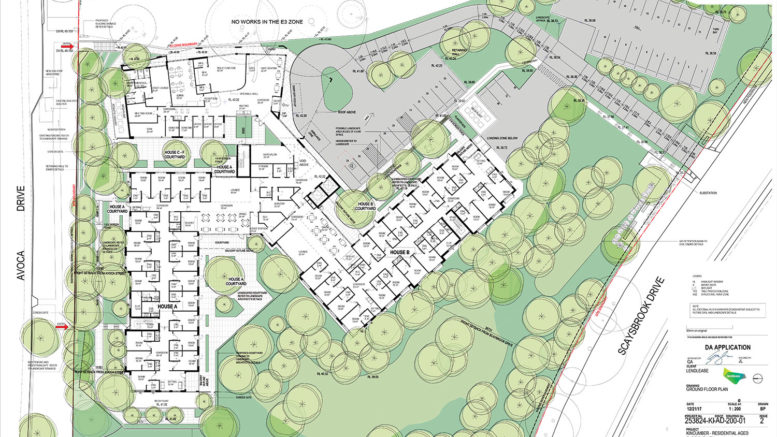 Brentwood Village Retirement Precinct at Kincumber is to get a 108 bed nursing home.

The Central Coast Joint Regional Planning Panel approved the development at its June 16 meeting after a public hearing where resident concerns were aired.

The panel said the proposed building was a structure that was larger than that normally anticipated in a residential area that had a general height building control of 8.5 m.

The height quoted in the application was 15.7 metres.

The panel said it was satisfied that the sighting of the building was an appropriate response to the site.

The suitability of the built form and the height of the building was considered acceptable because of the setbacks to Avoca Drive and Scarsbrook Drive and the landscape treatment proposed.

The panel said the existing E3 zoned land was part of the lot and contributed to the landscape setting.

“The development will result in a building in the landscape setting that is considered to be compatible with the character of the surrounding area, the panel said.

The panel said the reasons for the decision included the need for higher care services to support an ageing population.

It believed the traffic and parking impacts were acceptable.

The panel said that it had considered community views including amenity, safety, pedestrian accessibility, impact on trees and tree removal, social and economic impact.

“The panel considers the concerns raised by the community have been adequately addressed in the assessment report and that no new issues requiring assessment were raised during the public meeting,” the panel said.

Catholic Healthcare said it was delighted to announce the planning panel had approved the project.

“The home will provide 108 resident places and feature a range of shared amenities that will be enjoyed by residents, their families and the broader community,” Communications manager Natalie Shymko said.

“Catholic Healthcare is committed and focused on creating much needed additional services in the Central Coast for the growing aged population.

“As an organisation we continue to grow and expand our services for seniors and the community as the demand for aged care increases.”

The application said the proposed new nursing home would be in the form of several winged buildings which would step down into the topography of the site.

“This results in varying heights and a split-level development including a lower ground floor (basement) and two to three-storey heights,” the application stated.

It would include 108 beds, inclusive of 36 dementia care beds with about 40 staff employed at the site on any given day.