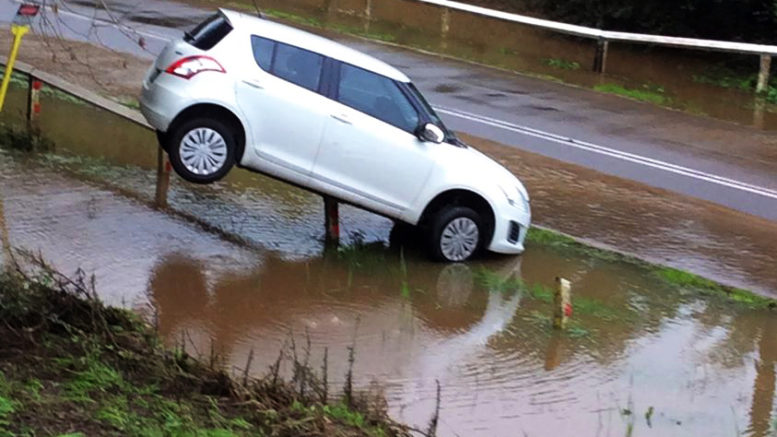 A car washed away trying to get through flood water in Burns Rd, and was left dangling on the barrier after the water receded. Archive july 2020

Residents in the northern suburbs have been on high alert for almost two weeks with two low pressure systems leaving a trail of destruction in their wake.

Only days after recovering from the first low, which swept through on July 12 causing widespread damage, emergency services were again bracing for the next onslaught and warning residents to make preparations to protect their properties against damaging winds and heavy rain.

The Bureau of Meteorology was forecasting a coastal low which would bring heavy rainfall leading to flash flooding, damaging winds strong enough to bring down trees and powerlines, and large and powerful waves resulting in hazardous beach conditions and erosion.

The deep low pressure system that formed off the southern Queensland coast moved south to batter the Central Coast on Saturday and Sunday, with winds averaging 70km/h and gusting up to 90km/h.

Relentless heavy rain fell overnight on Saturday, July 25, and throughout Sunday, causing widespread flash flooding at houses and on roads.

Bureau of Meteorology figures show Wyee as the Coast’s wettest suburb with over 200mm rain since Sunday with Hamlyn Terrace recording 163mm and The Entrance 109mm.

Wyee Point Rural Fire Service reported a busy weekend with six incident calls ranging from assisting NSW Ambulance Service to extract a patient, a search and rescue of people lost in bushland west of Wyee Point, and then on to storm damage.

On the wet and rainy Saturday evening, Tuggerah and Ourimbah RFS crews responded to an unknown fire at Kangy Angy around 4pm.

Crews were then called to reports of a motor vehicle alight some distance into the Ourimbah State Forest just after 5pm.

The vehicle and a small area of bush were extinguished and police are investigating the cause of the fire.

Deputy Unit Commander of Wyong SES, Sue Robson, said three crews worked all weekend to keep up with the 26 incidents they were called to.

“We had just cleared up all our weekend jobs by Monday afternoon and then we were called to nine new jobs on Tuesday morning,” Robson said.

She said most of the jobs were helping with rain inundation at houses and flash flooding around houses and on roads.

“We had a lot of jobs over San Remo way, and at Bateau Bay, we had to clear up a few trees that had come down and a few flood rescues where cars had got into trouble,” Robson said.

“We went to Burns Rd in Ourimbah three times to rescue cars out of flood waters, and over at The Entrance, at 11.45pm on Sunday night, we assisted police when a car crashed into a house and knocked the corner of the house out.”

The Ruttleys Rd causeway at Wyee was flooded, with some locals saying they hadn’t seen it flood in about 45 years.

Ourimbah Campus was closed on Monday, July 27, due to flooding

At Blue Haven near Spring Creek, one resident said that on Sunday the water had risen drastically in just one hour, completely flooding the yard and lapping over into the swimming pool.

With the rain starting to ease, residents are saying that the aftermath is often worse, as when the water recedes, the clean-up begins.