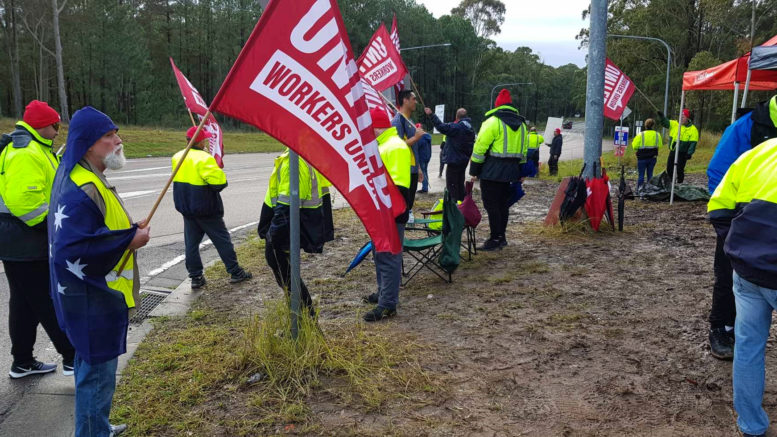 More than 500 workers at the Woolworths Distribution Centre at Warnervale took legal industrial stop work action for 24 hours on July 24 after negotiations over pay and conditions broke down.

The workers were demanding pay parity with workers who do the same job, for the same company, in Sydney.

“Workers are also calling for an end to Woolworths’ unsafe pick rates and insecure work which leaves many worrying if they will be able to support their family week to week,” he said.

“Woolworths warehouse staff have worked through the COVID-19 crisis, helping the company achieve record growth, but management continues to refuse their demands after almost five months of negotiations.

“There is no reasonable justification for workers in Sydney to be paid so much more than regional workers doing exactly the same job.”

Workers are asking Woolworths for: wage increases that place Warnervale workers on a level playing field with Sydney distribution centres; the ratio of permanent staff be 80 percent and casual staff 20 percent; unsafe pick rates be stopped; and, improvements to the pay classification structure.

(Pick rates are the number of items a worker is expected to move every hour.)

The Woolworths response to the workers’ strike was to close the distribution centre until Wednesday, July 29

“While we fully respect the right to strike, we need certainty in our supply chain to continue providing the essentials that the community relies on, especially in the current COVID-19 crisis,” said Woolworths Chief Supply Chain Officer, Paul Graham.

“To minimise disruption to our customers, we have enacted our contingency plans out of other distribution centres and will service store deliveries from these sites.

“We’ve negotiated in good faith for four months and accepted a number of claims from the bargaining representatives, but we won’t agree to unsustainable pay demands and the removal of basic performance expectations.

“We ask the bargaining representatives to reconsider the offer on the table because further industrial action won’t change our position,” Graham said.

Councillors showed unanimous support for the Woolworths workers by accepting an Urgent Notice of Motion from Cr Kyle MacGregor at the July 27 meeting.

Cr MacGregor’s Motion asked Council to note the importance of secure local jobs and the negative impact that this dispute between Woolworths and the workers would have on the wider community, and to call on both parties to recommence negotiations and allow workers back as soon as possible.

“I stand by the workers at Warnervale who have been locked out of their workplace despite wanting to return to work, asking for nothing more than a fair day’s work for a fair day’s pay,” Cr MacGregor said.

“It is my understanding that workers are concerned about pay rates that are between nine percent and 16 percent lower than workers in Sydney, depending on their classification, entry level work that is the second lowest paid in the country, casualization of the workforce and workplace insecurity.

“This is a time for industry to be supporting and working collaboratively with their workforce not locking people out who want a decent local job and economic security for their family.

“These are issues that affect our broader Central Coast economy and every family in our region, be it through their workplace or home directly, where they shop, or the standards that we are willing to accept as local workers.

“I was at the picket over the weekend, supporting the workers and their industrial representatives, and on Monday night, I was supporting them politically in the chamber,” Cr MacGregor said.

“I will continue to do whatever I can to support Central Coast workers regardless of their industry or job type, and as a local political representative, continue to advocate for secure high quality, high paying local jobs in our backyard,” he said.

Decision needed now on the future of Warnervale Train Station