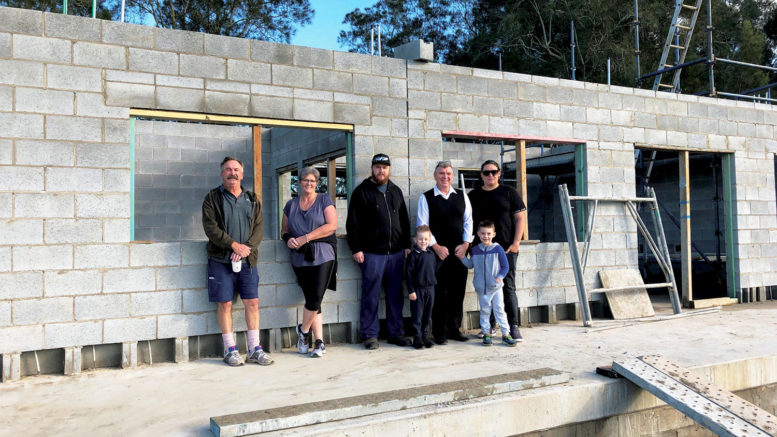 It’s been years in the making, but the Wyong Lakes Australian Football Club is just a month away from moving into their new clubhouse.

In 2013, the Magpies’ previous clubhouse at Tacoma’s Don Small Oval was destroyed in a suspicious fire.

The building was gutted and all the equipment stored there was destroyed.

Since then, the Pies have slowly but surely been working towards reclaiming what was lost and now, seven years later, they’re on the home stretch with the clubhouse build expected to be completed by August 31.

Pies President, Simon Wood, said the moment would go down in club history.

“This has been a long time coming but we are so excited at the prospect of finally having our new $1M asset ready for the community to use,” Wood said.

Like the club itself, the project has proven to be a hardy one, surviving a major overhaul, the amalgamation of Wyong and Gosford Councils, one very long tendering process, inclement weather delays and now COVID-19.

The new facility will be utilised primarily by the Pies, but will also be available to other codes using the oval, and will feature brand new everything, with new large changerooms, male and female toilets, disability toilets, clubroom, canteen and storage areas.

This was made possible through the collaborative efforts of the club, AFL NSW/ACT and all three levels of government.

For club veterans who’ve spent the better half of close to a decade fighting for a new clubhouse, it’s an emotional time, and the same can be said for the juniors and for newer members of the Pies who’ll soon be getting their first real clubhouse after years of operating out of temporary facilities.

Understandably emotions are running high, with the completion to signal a new era at the club.

“Seven years ago, our building was burnt down and since then it has been tough going for the club.

“There’s been a lot of times I’ve thought that it was just all too hard, but now here we are, just a month away from opening the new focal point for community sport in Tacoma,” Wood said.

Wood also extended his thanks to project managers PDA Building and to Central Coast Council for their ongoing support.

“The project progress by PDA Building has just been fantastic.

“They started from scratch in January and look how far it’s come,” Wood said.

With its million dollar price tag the new facility is also set to come with some shiny new bells and whistles, with a beefed up security system chief among them.

“The oval’s location is its biggest strength but it’s also its Achilles heel.

“Being so far off the beaten track allows it to be this big spacious sportsground, but it’s exactly that isolation that makes it easy for thieves and vandals to target.

“We’ve been dealing with the fallout from both for years and I’m so pleased to say that the new state of the art security system will include CCTV that can be monitored from off site, so we hope that deters any wrongdoing,” Wood said.

Wood said a grand opening celebration was now in the pipeline for September.