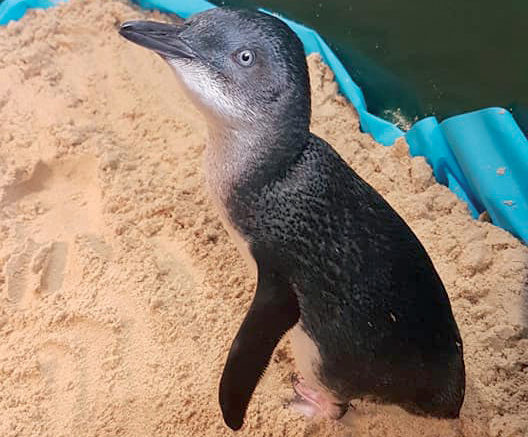 A fairy penguin is in the care of Australian Seabird Rescue Central Coast (ASRCC) after coming ashore at Terrigal Beach.

ASRCC Coordinator, Cathy Gilmore, said the penguin dubbed ‘Ariel’ by her rescuer, was located after spending a few days around the Haven.

“One of our fantastic volunteers, Jessie Fancett, combed the beach to find her.

“Our vet found lacerations around her body, most likely from being caught in fishing line or netting, and they’d become infected, so she wasn’t in a good way,” Gilmore said.

After a few days in care and a course of antibiotics, the little penguin is on the mend.

“We were a bit worried about Ariel as she wasn’t eating and had to be tube fed, but she’s really come over the hill.

“She eats by herself, she loves to swim and she preens, all the stuff penguins should be doing, so once she’s finished her course of antibiotics we’ll be planning her release.

“However, it was disappointing that no one called her in.

“A friend of mine actually messaged me about the penguin after her son saw her on the beach.

“We’ve been told she’d been in the area for days and that members of the public had been taking photos of her, but we did not get a formal report.

“Other than Manly, there are no mainland roosting sites for fairy penguins in NSW and they’re certainly not a common sight on Terrigal Beach, so it’s concerning that no one saw this penguin and thought something might be wrong,” Gilmore said.

Gilmore added the penguin was most likely the same one spotted near Terrigal Boat Ramp last week and believes she is most likely from the Lion Island colony.

Witnesses say they did report the penguin to a wildlife rescue service but according to Gilmore, the advice they were given about it migrating was misinformation.

Gilmore now encourages all Central Coast residents who come across seabirds and other marine life in distress to contact ASRCC by phone or text to 0438 862 676.

Fairy Penguin gets shredded ahead of big date

Rescue of the Month Award for saving four lives