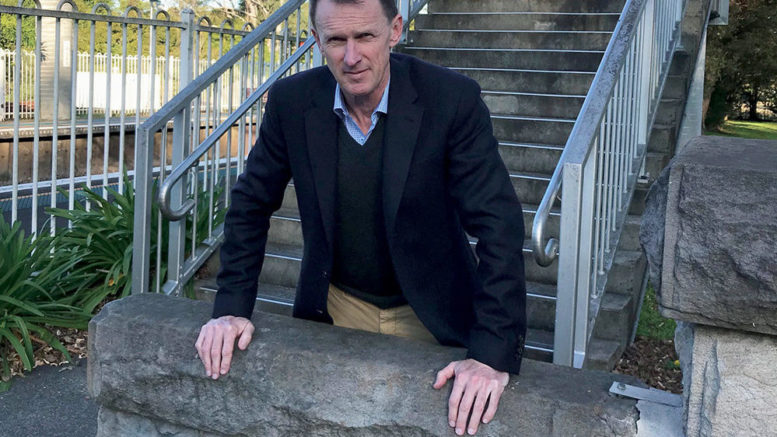 The Entrance MP, David Mehan, at the east wall of the war memorial at Ourimbah railway station

The Entrance MP, David Mehan, has called on the Minister for Transport to give an assurance that the eastern wing wall of the Ourimbah War Memorial will not be removed in the planned railway station upgrade.

Ourimbah War Memorial is an important heritage structure which complements the heritage of the station, he said.

Mehan welcomed recent planning approvals for the station upgrade, however, he said public design illustrations still showed that the eastern wing wall would be removed.

“Submissions made during consultation provided an alternative design to accommodate wider pathways for the lifts, without the need to interfere with the war memorial,” he said.

“Upgrading the station doesn’t need to be at the expense of the memorial.

“We need to ensure our local heritage and its significance is preserved, and to interfere with the war memorial is an insult to those who served in the First World War.”

The memorial, which was built in the 1920s and displays the names of Ourimbah locals who served in WW1, also comprises an archway opening to a garden.

Members of Ourimbah RSL Sub-branch and Mehan met with Transport for NSW (TfNSW) staff on May 27 at the memorial to discuss the importance of retaining the memorial untouched.

At that time, a spokesperson for TfNSW said there was a commitment to work with Ourimbah RSL Sub-branch to develop a strategy to avoid potential impacts to the monument and indicated that the potential for design amendments would be investigated.

“Transport for NSW design conditions need to be changed to make preservation of the full memorial a requirement of the design,” Mehan said.

TfNSW says in a public statement that following further design development there’s been changes to the proposed design since the Review of Environmental Factors was on public display in May/June.

One new kiss and ride space in the commuter car park has been added.

TfNSW has acknowledged that even though, generally, there was public support for the upgrade, there has been requests to protect the heritage aspects of the station and surrounding area, including the World War One monument and memorial garden, and recommendations for the lift design to reflect the historical nature of the station.

TfNSW says it understands the importance of the WW1 monument and memorial garden and its historical and cultural significance for the local community.

A public statement issued this month by TfNSW says that throughout the detailed design and construction phases of the project, it will consult with key stakeholders like Ourimbah RSL, to identify measures to minimise potential impacts to the monument and garden.

The upgrade will include two new lifts connecting the existing footbridge to the platforms, a new station entrance from the Pacific Highway, new stairs from the footbridge to platform 2, minor changes to existing waiting rooms to provide equitable access, a new access ramp from the Shirley St commuter car park to platform 1, platform resurfacing, improved amenities, lighting and CCTV for security and safety.

A contract for the project was awarded in June and early work on the upgrade is expected to start in coming weeks and to take up to 18 months to complete.

Preparation work needs to be completed before the new lifts can be installed, including service relocation, excavation, piling and platform work as well as installing new electrical services underneath the tracks.

TfNSW says that for the safety of the community and workers, and to minimise disruptions to train services, major construction will be done during scheduled trackwork weekends when trains don’t run.