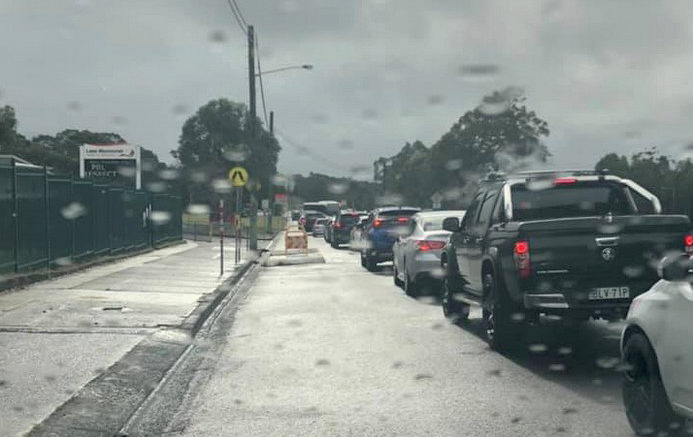 Lake Munmorah Progress Association Secretary, Stuart Durie, has welcomed plans for an extra car park in Carters Rd, but isn’t sure that it will alleviate traffic flow.

The Progress Association has been involved for more than a decade helping to resolve traffic congestion in the Carters Rd education precinct, where there’s four schools and an early learning centre with only one way in and out.

“Traffic flow has always been a problem and at the moment it seems to be even worse, apparently because of cars banking up trying to turn into St Brendan’s and going through the pick-up point in single file, due to the COVID rules,” he said.

Central Coast Council has allocated $650,000 in the 2020-21 budget for stage one of a car park and road upgrade which will go to the July 27 council meeting for adoption.

Durie said news of the car park was a breakthrough.

“It is worthwhile as at least, it will save parents parking illegally.

“Even when they were attending events at the school they were being booked,” he said.

Along with hundreds of other parents, Wright is still battling the morning and afternoon traffic tangle while her 12-year-old completes an education.

She’s bewildered by the inability of local and state governments over many years to resolve the issue.

“Any changes that they’ve made thus far have not done any good, in fact they’ve probably made it worse,” she said.

“There was even a problem when the primary school was built, there was congestion then, and now they’ve built another three schools and an early learning childcare centre, so that’s made the problem much much worse

“They’ve done studies before and they’ve changed some signage and the allocated time we were allowed to park in certain areas, but that disadvantages us even more.

“We were getting fined by the council because we could only park in areas for 10 minutes when we could previously park for a longer time.

“Council has got to stop saying it’s an RMS issue, and RMS saying it’s a Council issue, they’re just passing the buck and it’s not helping.

“There’s no easy solution, but in terms of traffic flow, there’s got be another alternative to Carters Rd, not just for traffic congestion but emergency vehicles would have trouble getting in, or even through the bank-up at the traffic lights,” Wright said.

Carters Rd was named in the notorious list of the five worst Central Coast roads in 2019, following an NRMA road survey which ranked it as just as problematic for the community as the Pacific Highway through Wyong.

It mentions extending Carters Rd to Scaysbrook Ave, Chain Valley Bay South, and/or to Teragalin Dr, Chain Valley Bay North, with the intention of reducing traffic through the Carter Rd/Pacific Hwy intersection and providing alternative access to those suburbs which currently have only one access road.

They are long-term plans and Council has requested funding from the State Government.

Another plan, medium term, is to provide a connector road between Tall Timbers Rd and Carters Rd.

The Plan states that the cost of any through roads would be met by developer contributions, but the problem at the moment is that there are no developers, said Stuart Durie of the Progress Association.

“It’s a disgrace and really is poor planning, and an absolute blight on the Council and the State Government for allowing other schools to be built after the public school without doing something about the traffic.

“It was known to be a problem right from the start and there was a promise from the State Government to work with Council, and they were going to build a car park and do a whole lot of other things.

“But they didn’t, and instead they gave the land over to the catholic schools to build yet another school to add to the traffic congestion problem.

“And as far as Council allocating $650,000 in this budget, that’s a paltry amount of money considering what the Council budget is

“There’s many many other things Council can trim and, for instance, what about the money that’s been saved by events and projects that haven’t gone ahead because of COVID-19, where’s that money gone?

“This has been going on for so long and they think they can just ignore it and it will go away and put their focus elsewhere.

“It’s not good enough, it’s been a long time and is not acceptable to turn a blind eye to it,” Brownlee said.