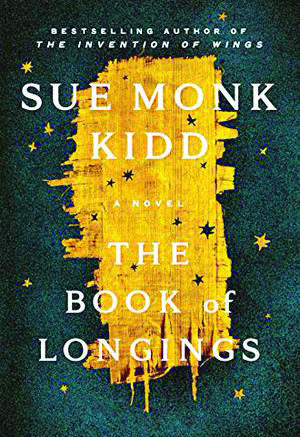 Ana is 14 and has grown up in a well to do household in Sepphoris (central Galilee).

Her father, Matthais, is head scribe and counselor to Herod Antipas.

Her mother is cold and distant.

Ana taught herself to read Hebrew at the age of eight … and Aramaic, and Greek, and Latin.

She begged her father for tutors, ink and papyrus – she wanted to study and learn but her aspirations embarrassed her father and infuriated her mother.

Yaltha, her aunt, has returned after being exiled in Alexandria. She was accused of murdering her husband and her daughter was taken away.

Like Ana, she is educated and becomes a mentor and confidante to Ana. Ana’s adopted brother, Judas (yep, that one) is a Zealot and would rather hang out with “radicals who agitated against Rome” then settle down and get married.

He appears now and then in Ana’s life until an argument with Mattias sees him banished from the house. Ana writes down the stories of the matriarchs in the Scriptures.

“Listening to rabbis, one would’ve thought the only figures worth mention in the whole of history were Abraham, Isaac, Jacob, and Joseph …. David, Saul, Solomon … Moses, Moses, Moses. When I was finally able to read the Scriptures myself, I discovered (behold!) there are women.”

Ana fills up scrolls with these stories. She secretly writes the lost histories of Eve, Bathsheba, Jezebel and other condemned women.

She writes of Tabitha, who had her tongue cut out for accusing a Roman guard of raping her, and of her aunt, Phasaelis, the first wife of Herod.

“I could feel the tiny lump of anger tucked beneath my awe. A half million scrolls and codices were within these walls, and all but a handful were by men. They had written the known world.”

It fuels her rebelliousness and she yearns for a life that is different than other girls. She does not wish to get married, especially to the man her father has chosen for her, a marriage would benefit him.

When the family travels to the market to work on the details of the marriage, Ana has a fall and another young man comes to her aid. Before he can assist a soldier intervenes and knocks him to the ground and someone calls out his name … “Jesus”.

Fate intervenes and the marriage her father arranged does not take place. But Ana becomes a pariah and is shunned by the town people. On one of her walks she runs into Jesus praying, they strike up a conversation and a friendship.

She has also drawn the attention of Herod Antipas who wishes her to be his concubine. She escapes but is accused of being a thief and is rescued by Jesus before she can be stoned to death.

Ana lives with Jesus in a household with his mother, brothers and their wives. Jesus is away for long periods of time trying to earn a living.

As Jesus begins to attract the wrath of the establishment, Ana is forced into exile in Alexandria. But when Judas betrays Jesus, she returns to her husband’s side.

The Book of Longings is a far cry from Sue Monk Kidd’s most well-known title: “The Secret Life of Bees,” (2001), although she has published other works on theology, including “The Dance of the Dissident Daughter,” which explores the lost history of the sacred feminine.

While the book focuses on the silencing of the feminine voice in antiquity, it is essentially a love story. And because Ana’s love interest (and eventual husband) is Jesus, that places it into its own controversial “wife-of-Jesus-stories” genre.

If nothing else. it makes me very nervous passing any judgement on it. There are, of course, several of these now, most notably Martin Scorsese’s adaptation of Nikos Kazantzakis’ “The Last Temptation of Christ” and Dan Brown’s “Da Vinci Code”, both of which were embroiled in controversy.

So I’ll just say that while I enjoyed The Book of Longings (and Kidd does a great job of keeping the focus of the story on Ana and not Jesus), it doesn’t quite reach the same literary heights as some of these others in my view.

It is clearly well researched – and perhaps if I knew my bible better (or at all) I am sure I would have appreciated it more – but it is just a little too bland and slow-moving for me.

Book Review – Then She Was Gone