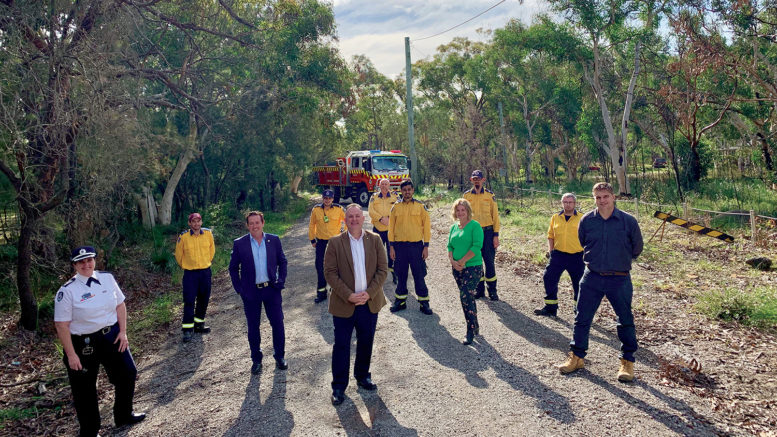 Charmhaven fire trails upgraded with rubble from the M1

More than 30,000 tonnes of rubble that was once part of the M1 Pacific Motorway has been used to upgrade a network of Charmhaven fire trails and others across the Central Coast.

The recycling project between Transport for NSW and Central Coast Council has saved Council about $1M and tripled the quantity of improvements that the budget would normally have achieved, said Council’s Environmental Unit Manager, Luke Sulkowski.

“Over the past three years, we’ve sourced about 30,000 tonnes of material for the fire trails road surface, making them accessible for Rural Fire Service vehicles, as well as a number of large boulders to help bushfire mitigation and to secure areas to reduce the capacity for arson and vandalism, including rubbish dumping,” he said.

“By sourcing that material, which has been delivered by Transport for NSW for free, it’s been a very beneficial outcome for Council in reducing costs, which has meant that we have been able to significantly extend our program.

“We’ve used the material at about 10 different fire trail sites and we believe that it’s also been a benefit for the State Government by reducing the costs of disposal of that material, which otherwise would have gone to waste,” Sulkowski said.

Arizona Rd fire trail alone took 1,500 tonnes of M1 material to fill major erosion holes and raise the road to natural ground level, and was then capped with another 2,500 tonnes.

Work was done in stages along the 700m long fire trail during September and November 2019, and it was only a month later when the devastating New Year’s Eve bushfire swept through Charmhaven.

“Fire trails play a very important role in accessing fires and bringing them under control.

“Last fire season, the local network of trails assisted firefighters in protecting hundreds of homes in the area.

“We have a total of 265 strategic bush fire trails within the Central Coast and Lake Macquarie local government areas, and many hundreds of tactical trails on top of that.

“It is a significant network of fire trails and they have to meet certain standards to allow the heavy vehicles using them to access areas to contain or control a fire,” Superintendent Campbell said.

The M1 upgrade has seen 200,000 tonnes of material recycled on the M1 surface as well and to be put to good purpose.

A Transport for NSW spokesperson said this recycling partnership with Council was one of only a few similar projects, but the largest so far, and would become the model for other councils to follow.

Minister for Regional Transport and Roads, Paul Toole, said the huge success of this project meant that the initiative could be used right across the state.

“This truly was a win-win situation because Transport for NSW saved on transportation and processing costs, while Council tripled its fire trail reinforcement program at no extra cost,” he said.

“These fire trails protect our region, protect our people, and a really good case in point is here at Charmhaven, which was on fire on New Year’s Eve, and we could have lost hundreds of homes that day if not for the fire trails for the RFS.

“Rural Fire Service volunteers were truly heroic in their successful efforts to save homes and lives here on Arizona Rd in Charmhaven, but the reinforcement of this trail in the months beforehand played a key role in that outcome.

“I have to congratulate Council staff for taking the initiative and working with Transport for NSW – when teams work together they deliver fantastic outcomes for regions like the Central Coast,” Crouch said.