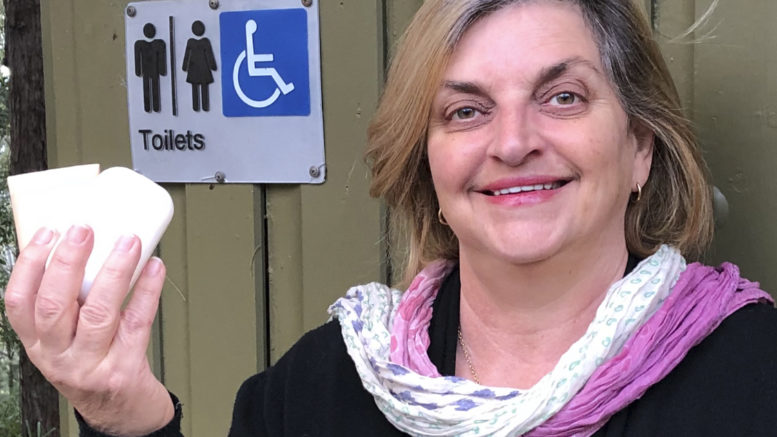 With regional travel restrictions recently relaxed and more visitors arriving on the Coast, a small but dedicated band of residents is determined to take personal hygiene into their own hands – literally.

Spearheaded by community activist, Joy Cooper, Operation Soap in Public Toilets has accused Central Coast Council of neglect in not equipping all public toilets with basic hygiene measures and is setting out to put soap into every facility in the region.

Cooper has launched a Facebook campaign, with more than 100 people joining in and some posts attracting in excess of 4000 views and likes.

While major Council facilities are equipped with soap, that is not so for dozens of smaller toilet blocks around the region.

A Council spokesperson said the Council does not provide soap or soap dispensers in its public amenities due to a history of them being subjected to vandalism, resulting in soap on the floors and a high risk of people slipping and injuring themselves.

“Council recently reviewed the installation of soap dispensers in all public toilets, however the decision was made to remain with status quo to minimise the risk of vandalism and slipping accidents,” the spokesperson said.

“We are shocked that Council thinks it acceptable not to provide something so basic in our public toilets,” Cooper said.

“It is neglectful, especially in these COVID-19 times.

“We can all be caught out and needing to use public toilets.

“Tradesmen use them a lot and I would much rather think that when a tradesman came to my home he had been able to wash his hands.

“Elderly people often have to use public toilets unexpectedly when out shopping and children playing in our parks use them frequently.

“And now with tourism opening up on the Coast again, surely we can provide soap in our toilets.

“I would also think it would be a work health and safety issue for Council employees who are out and about.”

Cooper said it was widely known that washing hands with soap and water is one of the most effective ways of reducing the spread of the coronavirus.

She said a lot of public facilities had been provided with soap by members of the group, including those at MacMasters beach, Copacabana, Terrigal, Avoca, Green Point Rumbalara, Burns Place, Point Frederick and near Gosford Sailing Club.

“We are getting a lot of messages from people saying it’s a great idea and I urge everyone to pop into a public toilet and put a bar of soap there,” she said.

Cooper said she was not concerned by the possibility of the soap being taken.

“Some of it is disappearing but it is being replaced,” she said.

“If someone takes it because they don’t have any at home, that’s not a bad thing.”

Cooper said members of the group were using a variety of soap, from luxury brand name, to home-made and oatmeal soap.

“Whatever people have they are putting in the public toilets,” she said.

“Some people are concerned about sharing bars of soap, but research shows this does not spread germs.

“Of course, it would be better if there were pump soap in the toilets.

“Council has said it is concerned it could be a slip hazard, but if pump soap dispensers are placed over sinks, I can’t see how this could be a real problem.

“We provide toilet paper in our toilets; what kind of message are we giving to tourists by not providing soap?

“Other councils are doing it – I can’t see why we can’t.

“And we plan to keep putting soap in toilets until Council steps up.”

Cooper said regular cleaning of toilets was also an issue.

“Some of them look like they’ve been tidied but not necessarily cleaned,” she said.

But the Council spokesperson said public toilets were cleaned based on usage and location and were seasonally dependant.

“Our cleaners currently carry out 461 cleans per week across 143 different sites on the Coast.”

Meanwhile, a response to a Question with Notice from Councillor Kyle MacGregor at Council’s May 25 meeting said Council would be developing a Public Toilet Strategy which will allow Council to look at ways to include soap in a safe manner in any of the new builds or renovations that occur.

The Cliff Richard tour ‘performs’ on the Coast