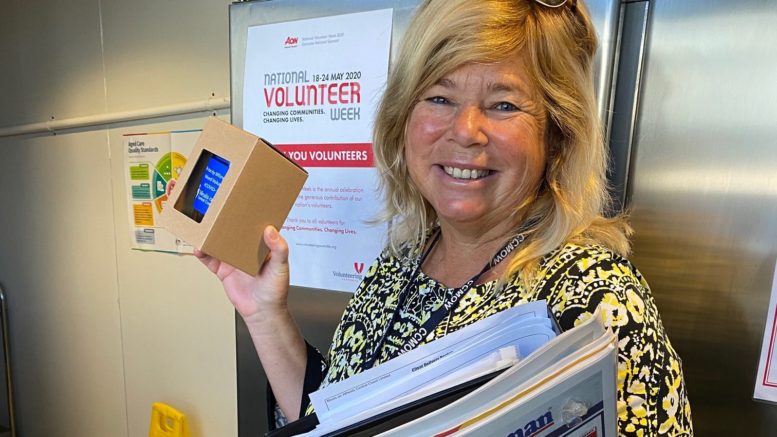 Central Coast Meals on Wheels’ Paula Howard has been crowned Volunteering Central Coast’s Volunteer of the Year for 2020.

The expo brings together 40 local community organisations to showcase the invaluable contributions of their volunteers, but due to the pandemic this year’s event had to be postponed until November.

The theme for this year’s National Volunteering week was ‘Changing Communities, Changing Lives’, and it’s apparent that all the award nominations have made a great difference.

“Indeed, the people of the Central Coast are very generous with their time, skills and hearts, with a higher percentage of people volunteering here than in Greater Sydney,” CCV Executive Officer, Fiona Morrison said.

Paula took out this year’s top honour for her tireless efforts to make Meals on Wheels Central Coast clients smile.

“For clients, Paula is the highlight of Meals on Wheels delivery days, something she has done for the last 21 years.

“Since being stood down from her Air Steward role in March due to COVID-19, Paula has increased her days to cover shifts of older Meals On Wheels volunteers that were required to self-isolate for their own wellbeing,” Morrison said.

“Paula brings joy and a beautiful smile to the Meals on Wheels clients, especially on Fridays when she dresses up in an outfit befitting a special season such as Easter, ANZAC Day or Christmas.

“Paula can be seen delivering to clients dressed as a unicorn, pilot, or Santa’s helper.

“Paula is special because in her ‘spare’ time when she isn’t working in her paid position elsewhere, she volunteers at the Meals on Wheels Central Coast Community restaurants with her beloved dogs Shadow and Sunny, to brighten the days of our clients.

“Dressing for the occasion, the trio have come as Santa’s helpers, Easter Bunnies and horse and jockey for the Melbourne Cup.

“Paula embodies the theme of changing communities, changing lives, and she brings joy to all wherever she goes,” Morrison said.

Each awardee will be formally presented with their award at a ceremony during the Volunteering Expo, to be held from 1pm at the Erina Centre, Erina Fair, on November 4.

NRMA teams up with Meals on Wheels