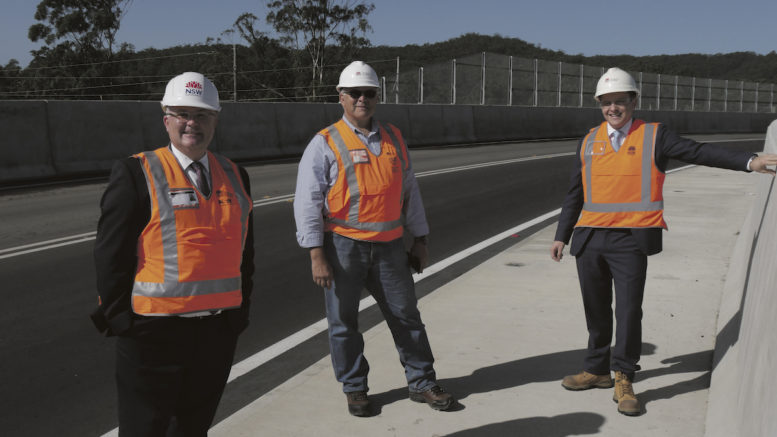 The roads are part of the development of the NSW Government’s New Intercity Rail Fleet maintenance facility on Enterprise Dr, which is on track to open later this year.

“Previously, Kangy Angy residents living on Orchard Rd have been cut off from Enterprise Dve during periods of flood, but the opening of the bridge means they will have a safe and flood-free route to travel to and from home,” Crouch said.

Another new access road, Tate Way, is in honour of Sergeant Eric Austin Tate from Wyong.

Private Redgate was 24 in 1915 when he enlisted with the 4th Australian Infantry Battalion and was killed in action on April 14, 1918, in France.

He was awarded the Star Medal, the British War Medal and Victory Medal.

Sergeant Eric Austin Tate was 23 when he enlisted in 1915 and served in 20th Battalion, Australian Infantry.

He was killed in 1917 by a shell lobbed into the trenches and he is commemorated at Menin Gate at Ypres in Belgium.

Private Richard George Buckton was also killed in action in Belgium only a year after he enlisted in 1916, aged 24.

He served in the 4th Australian Infantry Battalion and was awarded the Star Medal, British War Medal and Victory Medal.

Central Coast Mayor, Lisa Matthews, said Council’s recommendations for the region’s road naming to the Geographical Names Board of NSW was an important responsibility.

“It is particularly significant this year in light of the different ANZAC Day commemorations that we have experienced,” she said.

“On behalf of our residents, I am honoured that this place naming will be a lasting legacy for the families of these special Central Coast WWI veterans.”

He said a lot of the construction work was starting to wind down and the project was entering into the operational phase.

The noise wall has been built and more landscaping will take place around the boundary and along Orchard Rd.

Crouch said the project was boosting local employment and business opportunities for the Central Coast, with more than 300 jobs and apprenticeships during construction, and 100 jobs to be permanent once the facility started operating.